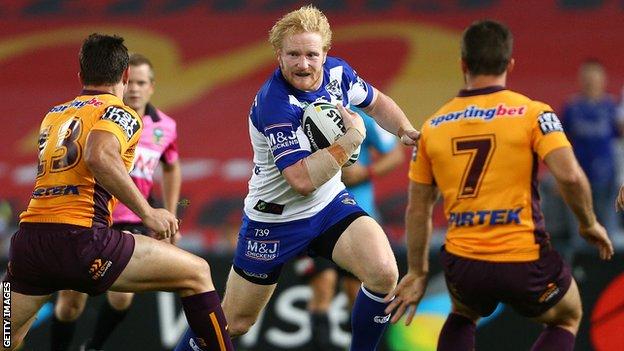 England international James Graham has not ruled out returning to former club St Helens later in his career.

The 28-year-old, who won Super League's Man of Steel award in 2008, recently signed a new four-year contract that will keep him with Canterbury Bulldogs in Australia's NRL until 2018.

And Graham says moving to Langtree Park at the end of that deal does appeal.

"I'll never say never and there's a big part of me that would love to play for Saints again," said the forward.

My intention was always to stay and we just needed to come to an agreement on a few things. I was never looking to leave or looking to come home just yet

He told BBC Radio Merseyside: "I was a supporter of the club from about seven years old and it will always hold a special place in my heart.

"I'd never fully commit to saying I'd definitely come back. We'll see how things unfold over the next few years.

"It might be that this is it after this deal and it might be retirement. If I am looking to come back, it might be a case that Saints have moved on and whether they would want or need me back is another question."

Graham made his senior debut for Saints in 2003 and was part of Daniel Anderson's treble-winning side of 2006.

He left St Helens at the end of 2011 and helped the Bulldogs to a Grand Final in his first season down under, although his involvement was overshadowed by a subsequent 12-match ban after being found guilty of biting Melbourne Storm full-back Billy Slater.

After completing his suspension, Graham - a member of England's 2013 World Cup squad - made another valuable contribution last year and was voted as the club's player of the season.

"My intention was always to stay [at Canterbury] and we just needed to come to an agreement on a few things," he added. "I was never looking to leave or looking to come home just yet."