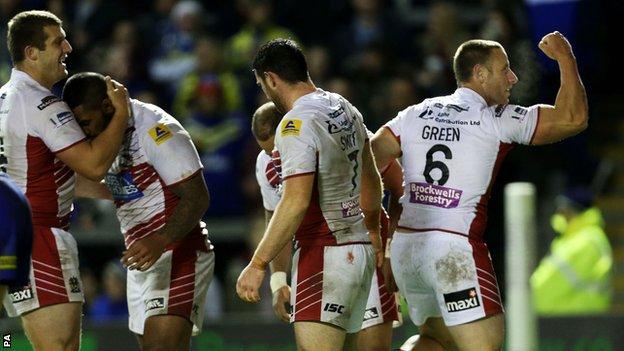 Wigan coach Shaun Wane praised his side for their "convincing" 12-4 victory over Warrington Wolves on Thursday.

The Warriors have made an indifferent start to the defence of their Super League crown in 2014.

But they produced arguably their best display of the season so far at the Halliwell Jones Stadium to repeat last year's Grand Final win over the Wire.

"There are not many teams that will come here and win as convincingly as we did," Wane told BBC Sport.

"With such a young team and important players missing, it is a big win."

Wigan were again without captain Sean O'Loughlin and hooker Michael McIlorum because of injury and suspension respectively.

Tries from Liam Farrell and Blake Green either side of half-time put the champions in control of the match and, although the visitors conceded a second-half score to Gene Ormsby, Wigan's defensive effort saw them home to a third win in five Super League outings this term.

"I've seen this performance coming," said Wane, who guided Wigan to the double in 2013.

"We've played well in patches of games but we've not been very consistent.

Warrington went into the match having won their previous three games, but were guilty of several handling errors in attacking areas and struggled to gain meaningful territory with the boot.

Wolves coach Tony Smith said: "Without the ball, we were as physical as I've seen my team for a long time and that's a real positive for me to take.

"With the ball, we were dreadful. We were way off with our kicking game."