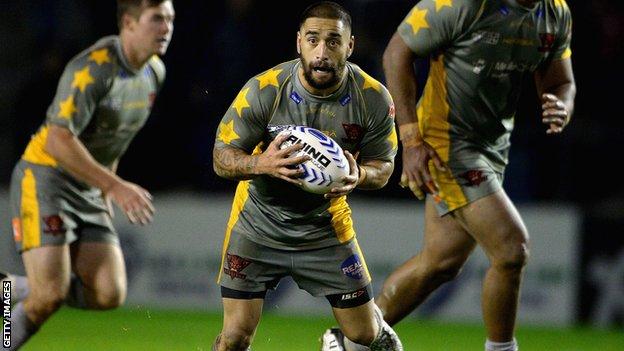 Rangi Chase says ending Salford's bad run on his return from injury was more important to him than beating former club Castleford on Sunday.

The England half-back returned after five weeks out to send the Tigers to a first defeat in 2014.

"I didn't have any point to prove and I didn't make anything personal," the 27-year-old told BBC Radio Manchester.

"Once you do that, you lose focus on the overall job. It just happened that we were playing Castleford."

Chase, who spent five years at Castleford before joining the Red Devils, left the Yorkshire club after submitting a transfer request towards the end of last season and received a lukewarm reception from the travelling supporters at the AJ Bell Stadium.

Half-back Rangi Chase joined Castleford in 2009 and spent five seasons with the Tigers.

He had been out of action since suffering a calf injury on his debut against Wakefield on 16 February, but he marked his return by setting up two tries for Andrew Dixon and also landing a drop-goal in the closing stages to secure a 23-16 victory.

"He makes a difference for us and that's why he's here," said Salford coach Brian Noble.

"He didn't do anything flash, he just did the things we asked him to do."

The result ended a run of three consecutive defeats for Noble's side, who have won three of their first six Super League matches, following a large turnover of players during the winter.

"We've got the talent there," said New Zealand-born Chase, who added that the only disappointing aspect of the performance was the failure to kill the game off quicker.

"We've just got to learn to suffocate teams and keep turning the screw. There's loads more improvement in us."