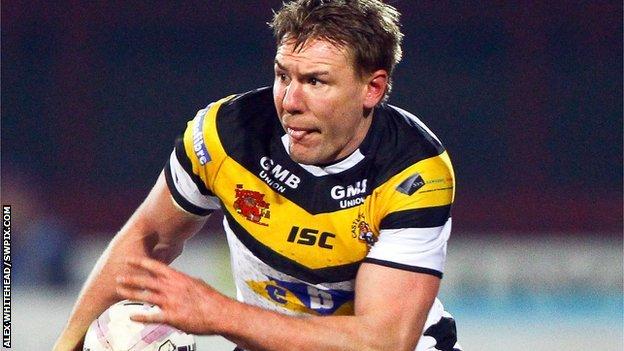 Castleford bounced back from their first defeat of the season by easing to victory over winless London Broncos.

The Tigers led 24-0 at the break after first-half tries from Michael Channing, Oliver Holmes, Michael Shenton and Liam Finn, his first for the club, all converted by Jamie Ellis.

Jamie Ellis kicked nine conversions out of nine to add 18 points with the boot.

It could have been worse for the Broncos as the visitors had two first-half tries disallowed.

But Cas, who go level on points with leaders St Helens, made up for it straight after the break with four tries in 10 minutes, as Craig Huby and Broncos old boy Luke Dorn also scored in addition to Shenton and Carney.

Mike McMeeken ran in the Broncos' late consolation, converted by Joshua Drinkwater, but they were a long way short of preventing their seventh straight defeat this season.

Castleford captain Shenton was the Tigers' chief inspiration, crossing twice and helping to set up three more as Daryl Powell's side claimed their sixth win in seven matches. But it was Daryl Clark and Ellis who combined to send Channing over in the corner for the first try on 11 minutes.

After Shenton then had another try chalked off by video referee James Child for straying into touch while grounding the ball, he turned provider on 22 minutes, breaking clear before delaying his pass to allow Oliver Holmes to go under the posts.

Shenton then did grab a deserved try after he snagged a teasing Finn kick before a further try was denied by the video referee as James Clare was adjudged to have slid into touch.

Mr Child was involved again before the break, this time confirming Castleford's fourth try when Finn touched down after Craig Huby had been stripped of possession by the post.

The visitors struck again on 46 minutes when Huby himself romped over after taking a Finn pass - and suddenly it was carnage as Carney, Dorn and Shenton all scored in the space of four minutes.

Carney added his second try - and his seventh of the season to make him Super League top scorer - with 15 minutes remaining when he seized on a Sneyd kick.

But the Londoners did at least have the final word, notching a try in the closing moments when McMeeken crashed over after a short pass from Scott Moore.

"Everyone needs an attitude change. We are getting blown away in games far too easily.

"It seems as though we are just trying to get through 80 minutes and going into damage-limitation straight from the off."

"Michael Shenton is back to his best. He has been an international before and he has designs on being one again, and his form at the moment warrants that.

"He is playing with confidence. He got a lot of the ball tonight and he hit a real purple patch.

"He looks in great shape and I think he will get even better with the service he is getting."