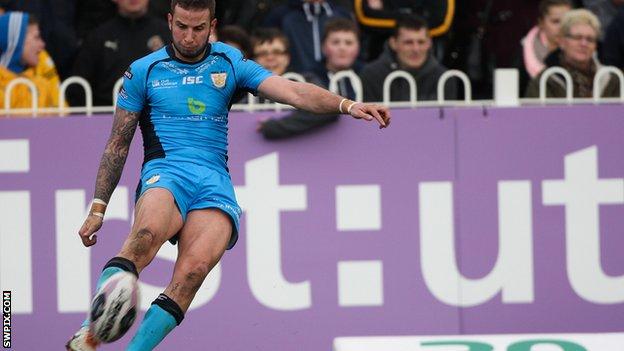 Jacob Miller, Jamie Shaul and Richard Horne also crossed for the hosts, who made light of the absence of suspended captain Gareth Ellis.

Greg Johnson and Junior Sa'u replied for Salford but the Red Devils were well beaten on the night.

The Black and Whites, who had failed to score a point in their previous outing, move above Salford and up to seventh.

After seeing out an early spell of pressure from the visitors, half-back Miller jinked his way through to touch down for the first try of the evening.

Miller's last-ditch tackle could not deny Salford winger Johnson a score in reply, but Shaul gathered Horne's kick to extend the advantage and the full-back ran 80 metres to set up Crooks just after the interval.

Sensing a chance to kill off the game, Horne collected a pass from Jay Pitts to cross for a fourth Hull score.

Centre Sa'u then grabbed a try to keep the visitors, who had ended Castleford's unbeaten start to the season last time out, in with a chance of an unlikely comeback.

But it never materialised in the closing stages, and Watts wrapped up a morale-boosting win for the hosts with a try in the dying seconds.

The two sides meet again in the fourth round of the Challenge Cup on Thursday and Salford will be without forward Andrew Dixon, who suffered a serious knee injury.

"I questioned our intensity and commitment last week [against Widnes] and one of the reasons for questioning that was the standards we had set ourselves in pre-season and we fell short of that last week.

"There were 21 tackles front up to start the game and then 23 consecutive tackles in the second half - it was nothing short of phenomenal.

"I've just said [to the players] 'appreciate why we just got that result'. It was because of the effort we put in and it's important we replicate that next week.

"We only get one shot at it and it's really important for the club that, at home in a cup fixture, we turn up with the same performance as we have done today."

"Hull were really energised, vigorous and ran hard. We knew there was going to be a backlash and we didn't handle it, so that's the disappointing element for me.

"The good thing is we get to come back here in six days. If we do things properly, we'll probably give ourselves more of a chance.

"I can never guarantee the result at a place like this, but I certainly expect a whole lot better than that."