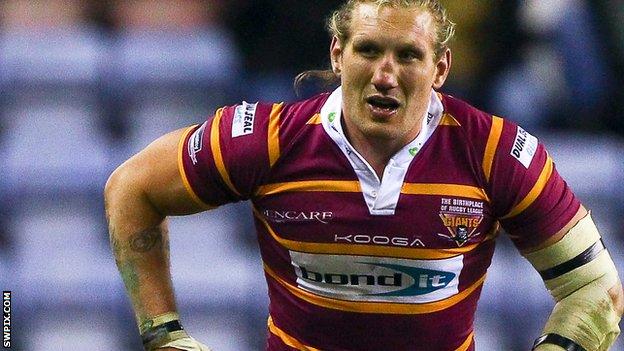 Huddersfield prop Eorl Crabtree says he will not be tempted to leave the Giants until they win a major trophy.

Crabtree, who is set to make his 350th club appearance on Sunday against Warrington, helped the Giants win the League Leader's Shield last term.

"I'd like to win something, a major trophy, and until I do that I can't see myself going anywhere," he told the BBC's Super League Show.

Crabtree, in his 14th season with Huddersfield, has endured relegation and won promotion back to England's top flight with the Giants, prior to helping deliver the club's first piece of silverware in the Super League era last season.

It was the first time in 81 years that Huddersfield finished top of the table, becoming only the sixth winners of the shield.

For his efforts the 6ft 6ins Crabtree, who weighs in at 18st, was one of five Huddersfield players named in the Super League Dream Team for 2013, although he was left out of England's World Cup squad.

Crabtree revealed that he has turned down offers to leave the Giants in the past, insisting that holding the Challenge Cup aloft and celebrating a Super League Grand Final win with his home-town side has been his only burning ambition.

The Giants have not won the championship since 1962 and last held the Challenge Cup in 1953.

"I've had the opportunity to move clubs, but I've just never decided to do so," he explained.

"I think it's because I have unfinished business at Huddersfield."