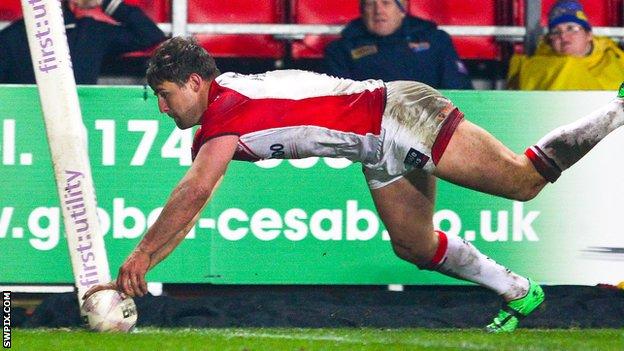 St Helens moved two points clear at the top of Super League, continuing their 100% start to the season with a dramatic win over third-placed Leeds.

Kevin Sinfield kicked two penalties for the Rhinos but Makinson's brace sent Leeds to a first defeat of 2014.

A night of landmarks

Leeds skipper Kevin Sinfield is one game behind the pair with 412 Super League outings.

Sinfield's first successful kick at Langtree Park took him to 3,500 points for the Rhinos, while Danny McGuire's opening try was the 250th of his career.

In contrast, Leeds welcomed back captain Sinfield and veteran prop Jamie Peacock for a much-anticipated game between two of Super League's early-season pacesetters.

Nathan Brown's men went in on terms at the end of a superbly-contested first half, with Walker's close-range effort levelling the scores after Carl Ablett's incisive run had set up Rhinos half-back McGuire for his 250th career try.

With defences on top early in the second period, Sinfield chose to take an easy two points when the hosts were caught offside near their own line.

St Helens appealed for a try that would have put them in front, but the video referee spotted a knock-on by Walker earlier in the move.

However, the disappointment gave Saints fresh belief and veteran captain Paul Wellens - who equalled the Super League appearance record on the night - darted through Leeds' defensive line and passed wide for Makinson to acrobatically touch down.

Sinfield slotted over another penalty to bring the scores level again at 10-10 with 12 minutes remaining, but was off target with an attempt at a drop goal.

Just when the game looked to be heading for a draw, full-back Jonny Lomax latched onto Lance Hohaia's kick and sent through a chip of his own for Makinson, who gathered cleanly and touched down to extend Saints' perfect start.

"It probably goes down for me as one of the greatest wins. It's tough to think back as long as I've been here where we've dug ourselves out of a hole and hung in there.

"It was a great spectacle. It's why it's the greatest game in the world.

"We knew last year's pain was going to be worthwhile. We've built a great squad and the foundations of the club are very secure.

"We've always had a very good youth structure and it's paying off now. For those kids to stand up to a great Leeds side and win is fantastic."

"I thought Saints deserved their win. I didn't think there was much in it and I wouldn't have felt ashamed if we had won it. It was a fair result.

"It was a tough game and I thought Saints defended extremely well.

"Momentum is a club thing and they clearly had some momentum. They were missing some people, but I just knew the kids they brought in would do a good job.

"We all know Jonesy is a warrior but he bust his bicep in the first 15 minutes and carried on.

"Our physio said at half-time that if I left him on, it would be a rupture, so we kept him off for the second half, but it was a huge effort."