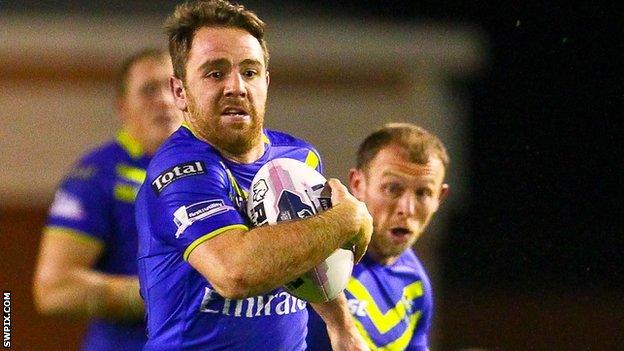 The hosts led at the break with Scott Grix and Jodie Broughton scores either side of a Rhys Evans reply.

But last season's Grand Finalists were a different side in the second period.

Huddersfield Giants prop Eorl Crabtree made his 350th appearance for the club.

Warrington started sluggishly and deservedly fell behind when Huddersfield second-row Ukuma Ta'ai broke the line before laying a pass inside to full-back Grix, who left an easy conversion for obliging stand-off Danny Brough.

A Brough penalty made it 8-0 before Evans, against the run of play, took a long pass from Richie Myler on the left wing, dummied to Ormsby and flew over in the corner.

Stefan Ratchford could not improve the tally, and the half-time scoreline looked fairer when moments later Brough seized on a bouncing ball in his own half and ran for the posts before playing in Broughton and adding the extras.

A quiet 20 minutes followed the restart before Myler took a long pass and beautifully stepped inside to score under the posts, sparking a Warrington onslaught.

The hosts conceded five successive penalties and eventually Westwood barged his way over the line to level the scores at 14-14, before Ratchford pushed his goal wide.

With nine minutes left, Warrington went ahead for the first time as Mickey Higham played in Russell who scored from close range.

Ratchford added a drop goal to stretch the lead to seven after Danny Bridge had successfully assumed kicking duties.

Myler was again the provider, this time for Ormsby to score, and after Bridge converted there was still time for Monaghan to shake off several tacklers and complete a comfortable looking Wolves victory.

"It's real simple. We had 12 sets with the ball in the second half, as opposed to 20-something in the first half.

"We turned the ball over too cheaply in the first half and it got worse in the second half. We had some poor finishes to our sets.

"Warrington are a good team who have points in them. When you are continuously defending your own line, it robs you of energy.

"We were masters of our own downfall. We've got a fair amount of people who are not where we want them to be at the moment.

"We've got to keep working hard and things will turn. I'm confident of that because we've got a real good group of players."

"I'm not here to talk about what we've done in the past, it's about what we're doing at the moment and we were in a real tough battle in the first half.

"I didn't think there was much between us and fortunately we were able to lift enormously in the second half.

"To keep a team like Huddersfield to nil for 40 minutes takes a big effort.

"I thought we were still a bit disjointed but we had a new half-back combination this week and we didn't expect it to be fantastic straight away."