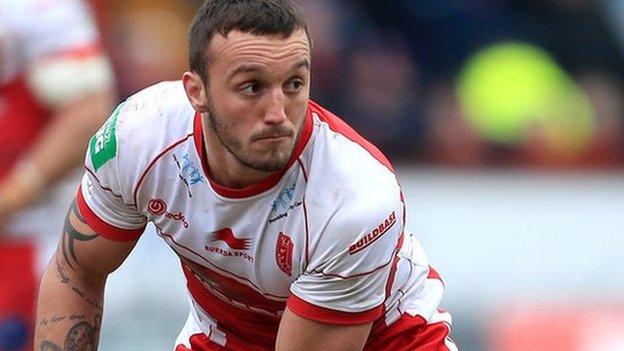 Hull KR ran in eight tries in a convincing win against the Wakefield Trinity Wildcats.

The hosts led 22-0 at half-time, with Travis Burns converting three of the tries from Neville Costigan, Omari Caro, Josh Hodgson and Kris Welham.

In the second half Caro, Hodgson and Welham all doubled their try tally and Kris Keating scored the other, with Burns adding another three conversions.

It was a rampant display from the Robins, who made it back-to-back wins for the first time this season.

Their early pressure was rewarded when Adam Walker's offload put in Costigan for the first try of the game.

Neat handling from Welham on the last tackle sent Caro in for the first of his brace and when hooker Hodgson burrowed over from close range it was looking like it was going to be a long afternoon for the visitors.

Welham was handed a gift on half-time when Paul Sykes failed to deal with Keating's kick and he touched down the simplest of chances.

The Robins had kept a cleansheet against the Bradford Bulls last time out and were looking like repeating that feat as the second half continued in the same fashion as the first.

Caro sprinted in for his second, before Keating skipped through some poor tackles to score the sixth try.

Hodgson and Welham both added a second score each to complete the home side's scoring, with Burns kicking six conversions.

They conceded their only try in two matches when Godinet intercepted and raced in with five minutes left, Sammut adding the extras.

But that was as good as it got for the visitors and Hull KR celebrated a dominant performance in front of their home support.

"Today was another small step in the right direction.

"It's pleasing because we were missing so many key players and we were caned 8-3 in the penalty count.

"I don't want to complain too much about that.

"I'll sit down and have a look at why we were penalised so much. When you lose the penalty count by so much, usually it's a closer scoreline.

"If someone had told me it would be 44-6 at full-time I would have taken that.

"I can't be too critical but I was very disappointed to have conceded that late try."

"What we served up there was terribly short of what we need to do.

"Some of the defence in the second half showed that we lacked effort.

"I thought that some of the tries in the second half made it look like we had waved the white flag.

"I don't think we were beaten by quality rugby. It's brought up a few questions as to why we would have a performance that lacked skill, effort and desire.

"We had so many blokes not wanting to work hard for each other.

"We will look at why our commitment and skills were so low."