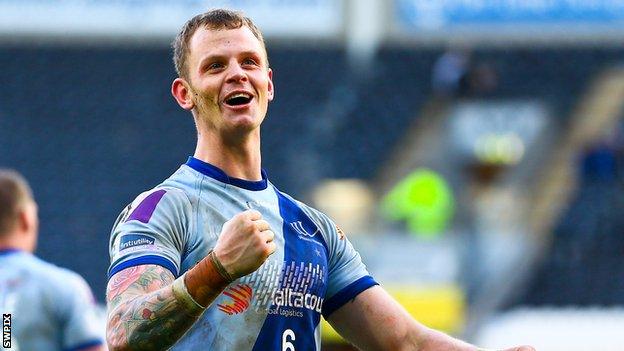 Widnes Vikings were able to hold on against a determined fightback by Super League strugglers Bradford Bulls.

But, with Vikings' Chris Dean in the sin bin, Liam Sutcliffe and Elliot Kear replied either side of half-time, only for Patrick Ah Van to score for Widnes.

Brett Kearney sped through to touch down as the Bulls drew to within four points, but the home side survived a nervous final 10 minutes.

With five wins from six, Widnes have made their best start to a season since returning to Super League in 2012.

Despite the defeat, Bradford can draw on a resilient performance to bolster their hopes of turning around a season of turmoil that started to look brighter in midweek with the news that Leeds-based businessman Marc Green had bought the stricken club.

The Odsal side are bottom of the table on minus two points after a six-point deduction for going into administration, and Green's first task will be attempting to retain Bradford's Super League status.

And while any form of recovery will take time, they can build confidence after pushing a flourishing Widnes team all the way.

The early signs were not promising though, as the hosts hit three consecutive tries without reply against the beleaguered Bulls, with Owens going over first after quick work from Tom Gilmore at the play-the-ball.

And Brown touched down two almost identical scores, both times sending the Bradford defence in the wrong direction with a superb dummy and making for the line.

Danny Tickle was able to convert both efforts for his first points of the afternoon, after hitting the woodwork with his earliest effort.

The Vikings might have been sensing an opportunity to rack up the points, and should have extended their lead when Owens looked to be through but opted to pass to Paul Johnson, who failed to take in the ball.

But Bradford were on the scoreboard when snatching a rare chance, with Widnes' Dean having been sin-binned for holding down, the Bulls were able to capitalise on the resultant penalty to send Sutcliffe over, with Luke Gale kicking the extras.

With Dean still absent after the break, a Gale kick to the corner was touched down by Kear, and Gale's conversion put the visitors to within four points.

Widnes thought they might have subdued the Bulls fightback as Cameron Phelps kicked through and Ah Van was able to make the score, despite almost sitting on the ball in the process, and Tickle added the extras.

But Super League's bottom side refused to lie down and, after Kear had come close on a breakaway, Kearney was able to race clear for a try and Gale popped over the conversion.

The Bulls pushed for a decisive fourth score, but Widnes held on to make it five wins from six this season and consolidate their fourth-placed position.

"I thought that we were totally in control but then they scored 12 points when we were down to 12 men and it really changed the game.

"I felt it was a great 40 minutes for us, I thought we were in real control so you've got to give to some credit to Bradford who came out and had some fight in them because of the try before half-time.

"I'm disappointed in the way we went about the game at times and not being a bit more convincing on the scoresheet, especially when we did certain things in the first half that would've given us that conviction."

"A lot has gone on this week but it didn't take the focus off today's game and what we were trying to do which was come here and get a win.

"The effort was there again for us and to be honest it's been there all season and since we've been in administration.

"The players worked really hard today and if we could have shown a bit more composure then maybe the result might have been different.

"We are just lacking a little bit of quality sometimes."