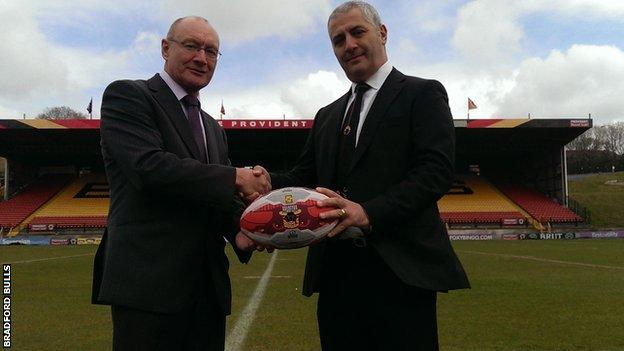 The Bulls went into administration before the start of the season and were deducted six points.

Green has assumed the role of chairman and has appointed Steve Ferres as managing director, with Robbie Hunter-Paul to remain chief executive.

"I am really pleased to have completed the takeover of this fantastic club," the 48-year-old said.

We will be working extremely hard over the coming months, with our number-one objective and main priority being to ensure Super League survival for this historic club

"Now that the takeover is complete, the team and I are in a position to move forward with the business.

"We are confident, in a short amount of time, we can make a full audit of every business unit and prioritise the aspects that will make the biggest impact.

"We will be working extremely hard over the coming months, with our number-one objective and main priority being to ensure Super League survival for this historic club.

"I am fully aware of the club's past successes and of its proud heritage, and am keen to build on it in the years ahead."

The future of the club was put then into doubt in February when the Rugby Football League deducted the club six points, prompting the club's proposed new owners, Bradford Bulls 2014 Ltd consortium, to pull out of the deal to complete their takeover.

Mandy Koukash, wife of Salford owner Marwan, submitted a bid to take over the club but revealed last week that she would not be the club's new owner.

The RFL has welcomed Green's takeover of the Odsal side.

"We welcome the announcement that the acquisition of Bradford Bulls has now been concluded, a move which brings to an end what has been an unfortunate period of instability for a club that can now face the future with renewed confidence," director of standards and licensing Blake Solly said.

"We are sure Marc and his staff will receive a warm welcome from the club's supporters and indeed the whole rugby league family."

The Bulls are currently bottom of Super League on minus two points and face Widnes on Saturday.