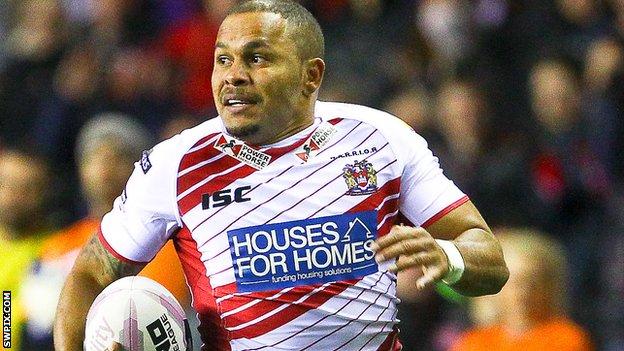 Wigan coach Shaun Wane says full-back Matt Bowen has made a satisfactory start to his Wigan career but expects him to excel later in the season.

The 32-year-old was signed as a replacement for Sam Tomkins, who left for New Zealand Warriors in the NRL.

Wane told BBC Radio Manchester: "I know him [Bowen] very well and I know what he's capable of. He's got a 50% increase in performance in him.

"He's not doing what we want him to do yet, but he's improving."

Bowen was one of the most consistent performers in Australia during more than a decade with North Queensland Cowboys.

But he began slowly with the Warriors, who were beaten by Huddersfield Giants in their opening Super League fixture and then lost to Sydney Roosters in the World Club Challenge.

Performances and results have improved since then, with Bowen contributing two tries in four league outings.

Wane, who guided Wigan to a Super League and Challenge Cup double in 2013, continued: "As long as I see him going that way [making improvements], I'm very chilled about it.

"Once the weather dries up and the tracks are harder, that's when we'll see the best of him. But I'm seeing improvements in him now when the weather's poor, so I'm very satisfied with him at the minute."

Wigan host Catalan Dragons on Friday and are boosted by the return of captain Sean O'Loughlin, who has recovered from a shoulder injury to be included in Wane's 19-man squad.