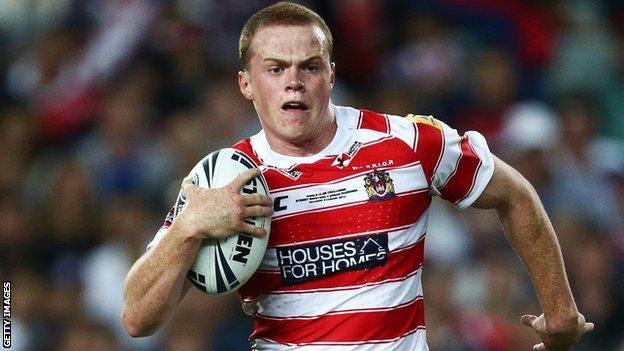 Matt Smith converted both Burgess tries to put Wigan 12-0 up on 10 minutes.

Dale Morton grabbed Dewsbury's only try after the break before teenage winger Burgess added his third.

However, the match was overshadowed by the news that Wigan assistant coach Iestyn Harris had left the club to take over as Salford Red Devils head coach.

The Super League champions got off to the strong start expected of them as Burgess linked up with Sean O'Loughlin to cross on four minutes, before then latching onto a Green grubber kick to complete a quick-fire brace.

Dewsbury fought their way back in the match and threatened to hit back before the break with Anthony Thackeray coming close with a chip and chase, former Wigan centre Karl Pryce bundling into touch and Morton denied a try for offside.

Wigan full-back Ryan Hampshire also had a first-half effort denied for obstruction, while the heaviest blow to the visitors was losing England winger Josh Charnley to injury.

Pryce sent Morton over for a deserved try, converted by Tom Hemingway, to lift local hopes of a unlikely cup upset early in the second half.

Tony Clubb's break to put Burgess through on 48 minutes eased the pressure on Wigan, and Sarginson went over before 19-year-old Burgess added his fourth score on his Challenge Cup debut.

Thornley took advantage of a tiring Rams defence, slicing through for a second-half brace and Williams came off the bench to add a score of his own to help seal the 10-try rout.

"Some of the boys have been up since five o'clock working and had to come straight to the game.

"We were always going to find it tough near the end and we just ran out of juice.

"But for 60 minutes we went toe to toe with the champions. We looked good for a lot of that period.

"Obviously the last 20 minutes was disappointing but we only had one sub on the bench."

"It was never going to be an easy ride in the first half - it was their cup final and they've got some good players and they're well coached.

"It's a small pitch and an inexperienced referee, so with all that combined we knew it was going to be tough.

"On the back of that, our completion in the first half was poor at 51% and in the second half we were at 94% so that tells you everything.

"He [Charnley] has hyper-extended his knee. We'll have him scanned tomorrow and there's a chance he might only be a couple of weeks."