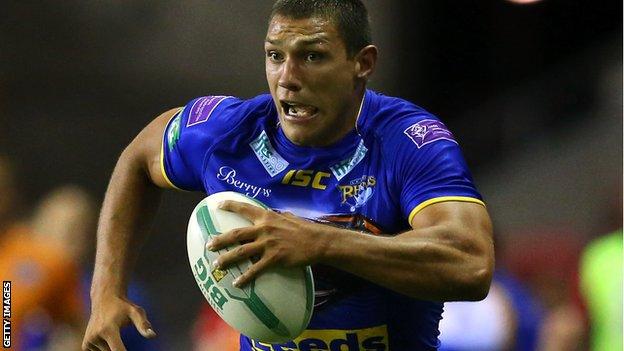 Ryan Hall marked his 200th game for Leeds with two of their 11 tries as they hammered Wakefield to storm into round five of the Challenge Cup.

Rob Burrow, Carl Ablett (two), Danny McGuire and Hall all crossed before the Wildcats had settled into the game.

Leeds made light of the absence of hooker Paul Aiton and fellow forward Jamie Jones-Buchanan, who were out with illness and a bicep injury respectively, as the tempo of the 11-times Cup winners proved too much for the home side.

The Wildcats managed to hold out for the first 18 minutes before Burrow went in at the corner from acting half.

It was the first of five tries in a 13-minute spell, with Hall and Ablett both rounding off moves began after misplaced kick-offs by Wakefield's Paul Sykes.

Godinet finally gave the home crowd something to cheer when two clever dummies created the space for his try, but Leeds ended the half with the same forward momentum that they began it as Hall sped clear to the line from Ablett's offload.

The second period followed a similar pattern and the only consolation for Wakefield, who have not reached a final since 1979, was that they prevented the Rhinos from doubling their tally.

Achurch exploited a large gap in the defensive line for the first of five second-half tries, rounded off by Moon collecting a chip from Kevin Sinfield, who also kicked eight goals, to touch down.

"We've come out of that game a bit busted up. We ran out of interchanges, we didn't have any fit bodies on the bench and we have probably got seven or eight doubts from that team.

"It is going to be a difficult one and the short turnaround obviously isn't going to help us in terms of getting it right on the training field, with the amount of injuries we've got."

"Ryan Hall's contribution to what we do is very good. One of the ways people judge wingers is how many tries they've scored and that's probably not the wrong thing to do.

"You've got to look at some other numbers in his game - how many metres he makes, how many carries he has, what he is like defensively, and all those other little areas of his game were very good [earlier in the season]."