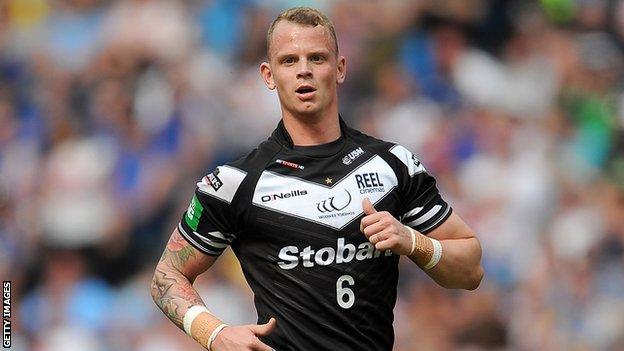 Widnes progressed to round five of the Challenge Cup after a first-half scare against Championship side Halifax.

A blistering start from the home team saw the Vikings 10-0 behind after 20 minutes as Ryan Fieldhouse and Gareth Potts both touched down.

Widnes regrouped at half-time before showing their class with five tries from Paddy Flynn, Declan Hulme, Phil Joseph and two by Kevin Brown.

The pick of them saw half-back Brown sprint over from 80 metres after an interception.

Denis Betts's Vikings will travel to Salford Red Devils in the fifth round.

"I'm reasonably pleased. We've got bigger games than that this season, but I thought we played well.

"I don't think a 24-point difference in the scoreline reflects how the game went out there, to be honest.

"We had to start the second half really well and we didn't.

"Defensively I thought we were a little bit soft in the middle, and they got a roll on. They turned their kicks into attacking kicks; they chased really well and they wore us down."

"Conditions were tough and they gave it a go. We expected that, and it took a bit of a kick up the backside at half-time to get our focus back on track.

"In the second half we changed our attitude; we were behind on the scoreboard and we knew our completion rate was really poor.

"We needed to get back to what we do best, the first-half wasn't good enough and we survived through hard work and resilience.

"We needed to keep our desire high and we definitely did in that second period."