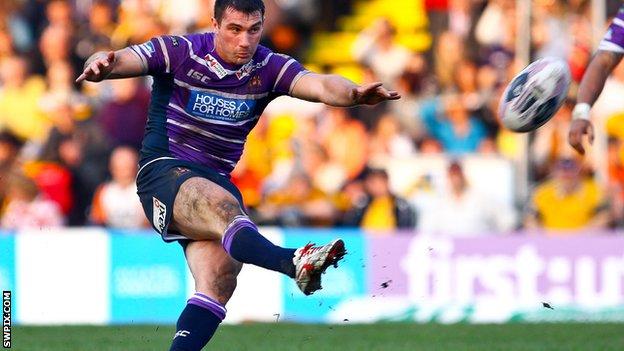 Wigan's Matty Smith says being allowed to leave St Helens earlier in his career will always motivate him to perform well against them.

The 26-year-old began his career with Saints but struggled for a regular place and joined Salford at the start of 2011 after a loan spell at the club.

"Every time I play Saints, I've probably got a point to prove. It's the first fixture I look for," the 26-year-old told BBC Radio Manchester.

England international Smith, who appeared in the 2010 Grand Final for St Helens against Wigan, signed for the Warriors in July 2012 and helped his current club to the double last year, winning the Lance Todd Trophy after being voted man of the match in the Challenge Cup final victory over Hull FC at Wembley.

Matty Smith played in the 2010 Grand Final for St Helens against Wigan. The Warriors won 22-10.

Wigan have made a mixed start to the 2014 season and lie fourth in Super League, six points behind leaders St Helens, who will hope to continue their 100% start when the two rivals meet at Langtree Park.

"We've not really performed to the best we can this year, and it probably takes a game like this - a derby game - to bring out the best in you," continued Smith.

Warriors coach Shaun Wane is also keen to stress the importance of the game to the players who have never been involved in a St Helens-Wigan derby before.

He added: "I'm trying to make sure our overseas players like Eddy Pettybourne and Matty Bowen understand what it means to the people of Wigan to win this game.

"I'm sure Keiron [Cunningham, St Helens assistant coach] will be over there doing exactly the same.

"If you start naming good players at St Helens, you could go on forever. Hopefully they'll have the same respect for my team.

"The last time they were beaten was by us [in James Roby's testimonial match during pre-season] so that will be in the back of their mind."