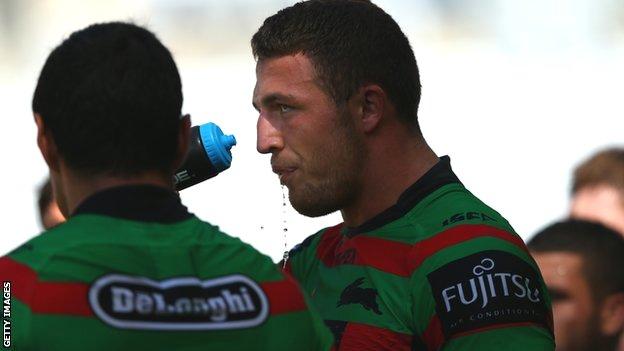 A fan who hit England forward Sam Burgess on the head with a stick has apologised.

South Sydney star Burgess was struck as he left the pitch following a tough 18-2 win over Penrith Panthers on Friday.

NRL side Penrith held an investigation into the incident and say the woman came forward to offer an explanation.

Appropriate action has been taken against the fan

"The fan has unreservedly apologised for causing any harm," a club statement read. "They have also offered an apology to Sam and South Sydney."

Burgess himself declined to comment on the incident at the time, but his mother Julie, who was at the stadium in Australia to witness the attack, vented her anger on Twitter.

She tweeted: "Would love to meet the woman (I'm being kind) who hit Sam with a stick as he was leaving the pitch.

Souths also made an official complaint on behalf of the 25-year-old Yorkshireman, who will return to England to play rugby union next season.

However, both clubs and the league now consider the matter closed.

"Appropriate action has been taken against the fan and Panthers, Souths and the NRL are satisfied that the matter has now been resolved," Penrith concluded.

Burgess has played rugby league since making his debut for Bradford in 2006, going on to play for both England and Great Britain.

In February, he signed a three-year deal with Bath.