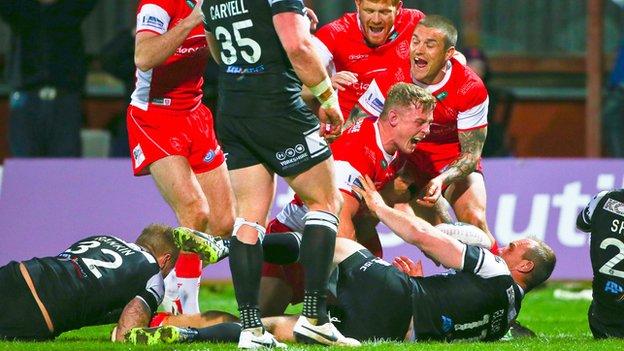 Rovers were 20-10 ahead well into the final quarter after two Graeme Horne tries in three minutes.

But, after one failed drop-goal attempt from Travis Burns, Hall was successful when Rovers got a second opportunity.

With Kevin Larroyer also on the scoresheet and Michael Weyman claiming his third try in two games, victory lifts the Robins ahead of the Black and Whites to sixth in the Super League table.

Graeme Horne scored the 50th try of his Hull KR career - against his old club, in the space of just three minutes, either side of brother Richard coming off the bench for the Black and Whites

The 23rd Super League derby between the two Hull clubs was marked by a particularly lively start, roared on by a fired-up crowd at Craven Park.

Then Weyman, following up his two tries in last weekend's 25-12 win at Warrington, charged over to put the Robins in front four minutes from the break, with Burns adding the extras for a 10-4 half-time lead.

Within five minutes of the restart, the Black and Whites were level at 10-10 when Watts got away with a forward pass in offloading for fellow replacement Josh Bowden to score, with Richard Whiting kicking the goal.

Rovers scored next when Horne showed great handling skills in the tackle, snaking out a left arm to plop the ball over the line.

Three minutes later, after Burns had kicked the goal, Horne got on the end of his own double kick-through for another try, making it 20-10.

And, although the touchline conversion was missed, it looked like centre Kris Welham had made it three tries in five minutes for the home side. But the video referee spotted an offence by Omari Caro earlier in the move.

On a night when he was the hardest worked man in the ground, it was last of three tries that the Robins had chalked off. Instead of a 16-point lead, the deficit was back to just four when Houghton sneaked over, Whiting converting.

At 20-16 ahead, with just under 10 minutes to go, Rovers sub James Green then dropped the easiest of chances to score, spilling a pass a yard from an unguarded line.

Four minutes from time, Hull FC appeared to have cashed in on that let-off. Richard Horne feeding Talanoa to make it 20-20.

Whiting missed the touchline conversion, though, and Hall converted a one-pointer to give the Robins victory after Whiting had charged down an earlier effort from Burns.

For Hull, it was their second drop-goal defeat in three games, having been undone by Rangi Chase's one-pointer for Salford in the Challenge Cup a fortnight ago.

"I don't want to comment but I was very disappointed at a myriad of decisions. That's a year's worth in one night. I'm happy the boys dug so deep under some extreme adversity.

"I'd have to say that was our best win since I came here, considering the amount of adversity. Under those conditions, to win the game, the boys deserve a lot of praise.

"We had to win it all over again. There were a few times when I thought we were going to be home, but Hull, to their credit, fought back."

"A derby loss is always tough to take. I don't want to tear the teddy up but we have lost another close game. It if they're not stinging, then I'm coaching the wrong group.

"The statistics might show I am wrong, but I felt they had more possession than us and we didn't make them work hard enough to come away from their end of the field.

"We felt like we were chasing and it happened too often. It got to 20-20 and we got back into it. But we have had opportunities in massive games. We have to take them and we didn't. "