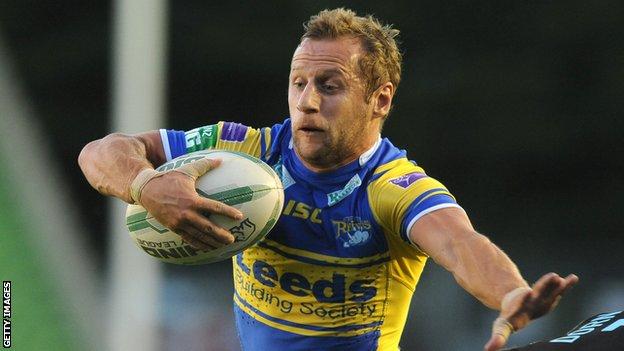 Rob Burrow marked his 400th Leeds appearance with a try in a convincing derby win at Bradford.

Tries from Kevin Sinfield, Joel Moon, Danny McGuire and Ryan Hall inside the opening 14 minutes put the visitors in control before Lee Gaskell hit back with an 80-metre interception try.

It was also a milestone occasion for Bradford full-back Brett Kearney who played his 100th match for the Bulls.

Francis Cummins's Bulls suffered two set-backs before kick-off, losing winger Jamie Foster, when he was forced out with illness, and skipper Matt Diskin, who suffered a calf injury.

It got worse for the hosts when they lost centre Matty Blythe with a potentially serious knee injury, while James Donaldson (ankle), Adam Sidlow (back) and Gaskell (ankle) will be assessed ahead of Monday's clash with Wigan.

Sinfield grabbed the opening points by pouncing on a deflected McGuire kick in the third minute.

Hall sent Moon over for a try, then grabbed one of his own either side of a McGuire effort to put Leeds 20-0 up.

As full-back Zak Hardaker pushed for another Rhinos score, Bulls stand-off Gaskell collected the ball to outsprint Watkins for a remarkable response after 22 minutes.

Tom Briscoe was denied a try for a knock-on after the break, only for the ball to be worked across the pitch for Hall to cross for his second.

Danny Bridge failed to hold the ball when Brett Kearney broke from halfway in what looked to be a certain score for Bradford.

Leeds substitute Sutcliffe, who spent a month on loan to Bradford earlier in the season, then scored, as did Watkins before Carl Ablett found Burrow in support to complete a memorable win.

"If anything can go wrong, it's going wrong at the moment.

"We lost a couple of players early who weren't going to return. For a long time, we had one sub. For the last while, we didn't have any.

"We're miles better than we're showing, but we can't stick to what we do well for long enough. We're not playing to anywhere near our potential, which is frustrating."

"We probably dropped off in the final 20 minutes of the first half, but there was an element of frustration at half-time.

"The way we played in the second half was probably more pleasing than the start. It shows a fair amount of maturity to know how to react."