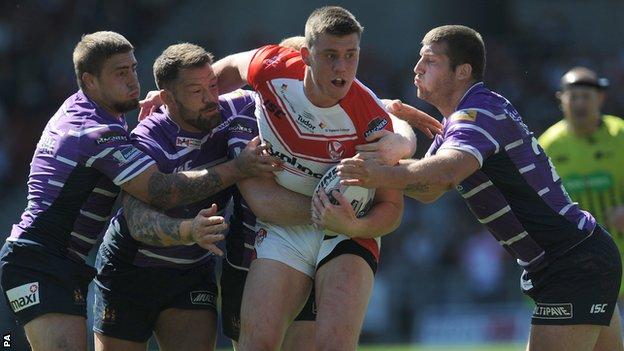 Liam Farrell crossed either side of the interval for two of Wigan's five tries.

Saints remain a point clear of Leeds at the top, with Wigan a further three points behind but with a game in hand.

Shaun Wane's Warriors began the defence of their Super League crown in unconvincing fashion in the early weeks of the season but proved their title credentials with a fifth consecutive league victory.

Saints played their part in a contest high in quality and intensity, but saw their eight-match winning run ended.

Both sides scored tries in a frenetic opening five minutes.

The visitors went ahead through their influential captain Sean O'Loughlin, but Saints were quickly level when a break from Jonny Lomax set up Makinson to become the first player to score 10 Super League tries this season.

Saints saw Matty Dawson's effort ruled out by the video referee for obstruction, after which Wigan scored two of the best tries of the season so far to establish a lead that they did not relinquish.

Excellent running from Blake Green and O'Loughlin set up Dan Sarginson to cross in the corner, before Joe Burgess claimed a towering kick out wide and passed inside to Farrell, who collected one-handed and raced over from 30 metres.

The prolific Makinson found space to touch down again for the hosts and centre Jordan Turner reduced the gap further, but Matty Smith's penalty stretched Wigan's lead to six points at the interval.

There was an element of good fortune about Farrell's second score, his kick rebounding off Lomax and straight back into his arms, resulting in an easy run to the line for the second-rower.

Teenage winger Burgess enhanced his growing reputation with another terrific breakaway try - and a sixth successful kick at goal by scrum-half Smith, playing against his former club, gave the Warriors a comfortable advantage.

St Helens produced stirring comebacks to beat Huddersfield and Castleford in their previous two outings but Nathan Brown's men could not find a way back, failing to register a point in the second half, with Smith's late drop-goal completed a convincing Wigan victory.

"They were far better than us today.

"Sean O'Loughlin showed why he is one of the best players in the world - he was far and away the best player on the field. He's a sensational player and that's why 'Waney' saves him for the big games.

"You can't carry players against them and we had too many players out there not at the level need to be to beat a champion side.

"We had some nice sequences of play in the first half but we turned the ball over too much in the second half."

"For me, as a Wigan bloke, for us to come here and win as comfortable as that against a very good team, I can't tell you how good it feels.

"I was really pleased when they won that game at Castleford [seven days earlier]. We were all screaming for it because we wanted to come here with them unbeaten.

"For the last few weeks, everything has been geared towards this game. We knew that, if we started really well, it would put them under the pump and that's the way it panned out."