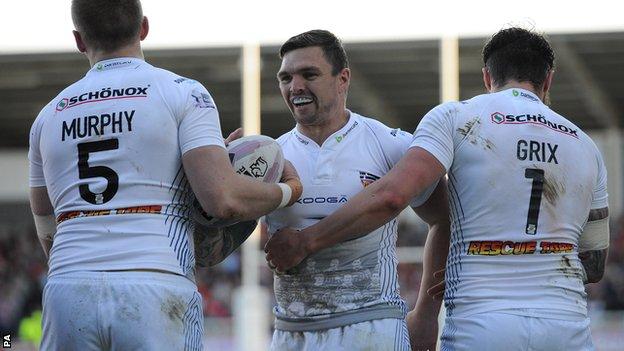 Huddersfield returned to winning ways in Super League, running in seven tries in a 42-22 victory at Salford.

The Giants had lost their previous four games in all competitions but raced into an early lead that they maintained for the remainder of the match.

Despite Meli's expert finishing, Salford were defensively poor and struggled to recover from the concession of three tries in the space of five first-half minutes early on.

Giants back on form

Before beating Salford, Huddersfield had lost their previous three Super League matches against Catalan Dragons, Warrington Wolves and Hull FC, and also lost to St Helens in the fourth round of the Challenge Cup

Hooker Lunt crossed for the opener and winger Murphy took advantage of a collision between Salford duo Jake Mullaney and Greg Johnson to add a second, before skipper Brough extended the lead.

But the Red Devils, playing their first game at home under new coach Iestyn Harris, enjoyed a prolonged spell of pressure and were rewarded when Meli finished from Rangi Chase's pass.

The home side were back within eight points when veteran prop Morley powered his way past three Giants defenders to score his first Salford try, but Murphy crossed for his second after good work from Scott Grix to give Huddersfield a 22-10 lead at half-time.

Chase and Meli combined again to create a second try for the former St Helens man, before the game was interrupted by an injury to Shannan McPherson.

A powerful Brough kick caught McPherson full in the face and the Red Devils forward left on a stretcher with severe concussion after receiving around 10 minutes of treatment on the field.

The Giants regrouped quickly after the stoppage and crossed twice more in quick succession, firstly Leroy Cudjoe's excellent offload sending McGillvary over, before Brough provided the pass for Bailey's try.

Ashurst collected Gareth Hock's pass and touched down to give the home side some hope, but the Red Devils were unable to mount a serious fightback and Murphy completed his hat-trick with a simple try in the corner to seal Huddersfield's victory.

Meli's third was merely a consolation as Paul Anderson's Giants, who won the League Leaders' Shield in 2013, jumped above Salford and up to ninth in Super League.

"If you concede 18 points very early, you are always chasing your tail but across the board we did some good things and some bad things.

"It's about us learning to be a little more consistent. We're working hard to do that and it's going to take a little time."

On Greg Johnson and Shannon McPherson: "They've both been taken to hospital. We'll get an assessment of them later."

"The real pleasing thing for me is that we won. I had to have a deep think about what our song was at the end because it's been a while.

"I'm hoping it's only three days before our next one.

"There were some big improvements from our last outing. That wasn't hard to do but we did some real good things, especially defensively.

"That was the key for us because Salford are very dangerous and we coped very well.

"Our attention wavered at times but to score 40-odd points against a team with their personnel is very pleasing.