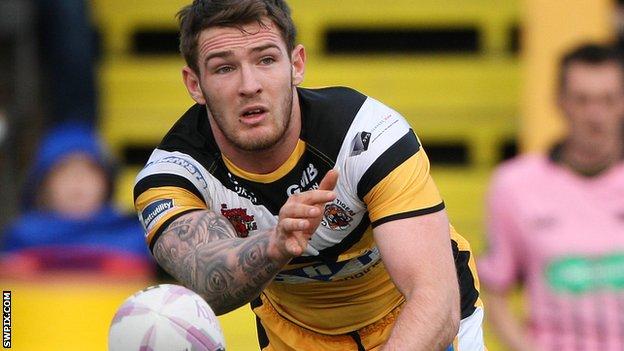 Castleford consolidated their spot near the top of Super League with a 43-20 win over struggling Wakefield.

Richard Owen scored two of Castleford's five first-half tries as the Tigers raced into a 26-12 lead at the break.

The Wildcats fought back to within six points but Daryl Clark and Scott Wheeldon completed their braces to seal victory for the visitors.

Castleford Tigers have won seven of their nine Super League matches this season.

Prolific winger Justin Carney gave Cas the perfect start, barging past Sammut to score his eighth try in five matches, before Clark touched down for his first under the posts.

Wakefield hooker Paul McShane replied, but then conceded possession and Owen took advantage to cross for his first.

Sammut and Owen swapped tries before Wheeldon burst through a gap in the Wildcats defence to give the Tigers a 14-point lead at the interval.

Daryl Powell's side had allowed a bigger half-time advantage slip in their previous outing against Saints and it appeared they would be in for another tense finish as Reece Lyne and Sammut both collected kicks to score tries for the hosts.

But Liam Finn touched down Marc Sneyd's grubber kick to ease any Castleford nerves, before Clark and Wheeldon clinched victory with breakaway tries in the closing stages.

"I think our ability to tough it out when we're tired is the issue for us at the moment.

"I thought we came up with some poor one-on-one misses early doors for soft tries, we worked our way back into the game and challenged them early in the second half.

"We were a fair bit off and never really got going. Wakefield did some things on us that caused us a little bit of trouble and we conceded some soft tries from kicks.

"Overall it was one of our worst [performances]. We just never got going, but we did show a fair bit of resolve, we tidied our game up a little bit towards the back end and Wakefield tired a little bit like we thought they might do.

"Once the game looked like it was gone, Wakefield looked like they were struggling mentally at that point and we took advantage at the end. There was some improvement in the way we managed the game but I still thought we can do things a little bit easier at times."