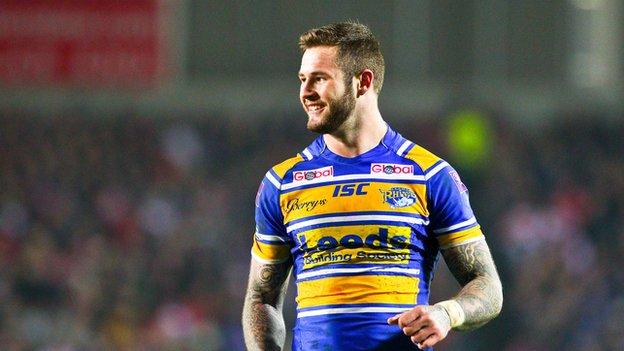 Leeds Rhinos moved to the top of the Super League table after a comfortable win over Salford Red Devils.

Kevin Sinfield opened the scoring before Logan Tomkins hit back with a try from dummy-half for the visitors.

But the home-side ran away with it after the break, Zak Hardaker, Rob Burrow, Ben Jones-Bishop, Ryan Hall and Tom Briscoe all crossing.

Leeds move above St Helens, who they will face in the Challenge Cup fifth round next weekend.

The home-side scored first through captain Sinfield after a Mitch Achurch break opened up the Salford defence.

The Red Devils replied through Tomkins who dived over from dummy-half but Jake Mullaney couldn't add the conversion.

The visitors were denied shortly after when Stuart Howarth was held up by Ryan Hall and Danny McGuire on the line, as the latter picked up a facial injury in the tackle.

Leeds scored quickly after the interval, Jones-Bishop's 80-metre break putting Hardaker in under the posts with Sinfield adding the conversion.

Burrow offered good support on the inside after Joel Moon's touchline run to add Leeds' third, before Jones-Bishop went in under the sticks after Hardaker broke through two attempted tackles.

Hall crossed in the corner to put real daylight between the sides, with Briscoe's great individual try wrapping up the win for the Rhinos.

"I thought Salford were very dogged. They came with a game plan and pretty much exposed us quite a lot throughout that game, credit to them.

"It was anybody's game up until maybe 60 or 70 minutes in, and probably the difference was our outside backs.

"We are proud to be top and the task is to hold that position now. I'd be a liar if I shrugged my shoulders and said 'yeah, well it doesn't really matter', it does. We'd like to be top and we want to lead from the front."

"I'm disappointed with the result but with regards to performance, I thought we were better. I thought there were times in the game where if we had taken a couple of opportunities it could have swung in a different direction.

"Ultimately that is why Leeds are at the top. They are resilient when they are under pressure and they know how to handle those types of situations. We're not quite there yet as a team.

"We've got to make sure we work on the smaller areas so we can become a little bit more resilient and stay in games longer and turn the tide the other way, because I thought Leeds were there for the taking today."