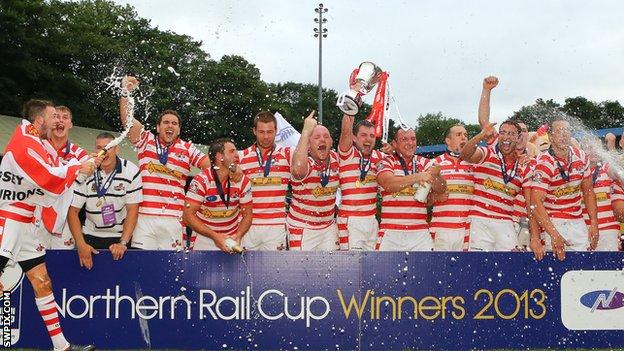 Leigh finished bottom in their only season in Super League in 2005, and have failed to get a licence for the top flight since then.

Noble was impressed by the Centurions after his Salford side beat them in a pre-season friendly in January.

"They really do have Super League credentials," he said.

"I thought they would win the competition [Championship]."

In preparation for the re-introduction of promotion and relegation between the Super League and Championship, the Centurions ended their dual registration partnership with neighbours Wigan Warriors in December in order "to stand on their own two feet".

The Centurions, who extended their perfect Championship record to eight games with a 60-24 win against Swinton last week, will be looking to book a Challenge Cup quarter-final place on Sunday when they host Championship rivals Featherstone.

"They [Leigh] will be hoping to stamp their authority."

Two non-Super League clubs are guaranteed a place in the last eight of the competition with Swinton hosting Keighley Cougars on Saturday.