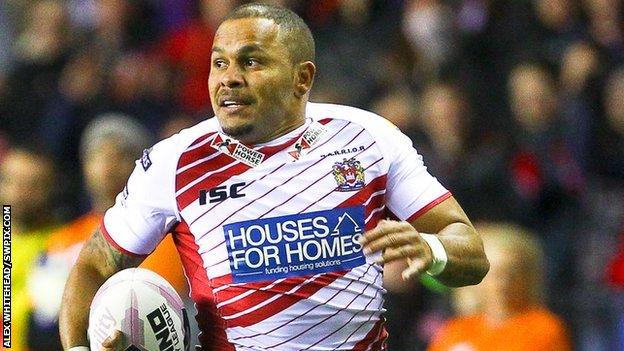 Wigan full-back Matty Bowen ran in a hat-trick and scrum-half Matty Smith claimed an individual 24-point haul as the Challenge Cup holders comfortably saw off Hunslet at the DW Stadium.

Bowen's treble was part of the Warriors' seven-try first-half haul as they went in 42-8 up at the break.

But the visitors, who last won the Cup 80 years ago, were much tidier after the break, shipping just two more.

Challenge Cup record holders Wigan are chasing a 20th victory in the competition - and a third in four years.

Hunslet are two-times winners of the Challenge Cup and finalists on four occasions.

George Williams went through for Wigan from Scott Taylor's pass after three minutes, and Bowen got his first soon after.

John Bateman's right side break put him in the position to send Smith under the sticks, and Liam Farrell ripped in soon after.

Grimshaw's intercept try got the Hawks on the board, and after Bowen's second for Wigan, Mapals got in at the corner for a second Hunslet score.

Smith dummied his way to the line from close in and Bowen completed the first-half scoring for his hat-trick with 13 minutes of the opening period to play.

Dan Sarginson showed strength to get in after half-time for Wigan, a further score from Jordan James taking Wigan past 50.

"I just wanted to win the game in a decent manner. I was into the players all week about starting well and we did. We were a bit disrupted with the changes we made and we didn't finish the game very well.

"The second half wasn't great but we did enough and we are in the next round.

"We were really frustrated and disappointed with our first 20 minutes. We were 24-0 down after 13 minutes. We lacked trust and belief in our defensive systems but, once we addressed that from 25-30 minutes in, we gave Wigan a good contest.

"Our defensive effort in that second half was great. We did some decent stuff with the ball as well. Overall I am really pleased.

"Our league form has been good. We are top of the ladder in our league and we have got to make sure we use all the positives that we take from this game and keep that momentum going to make sure we get that valued promotion spot."