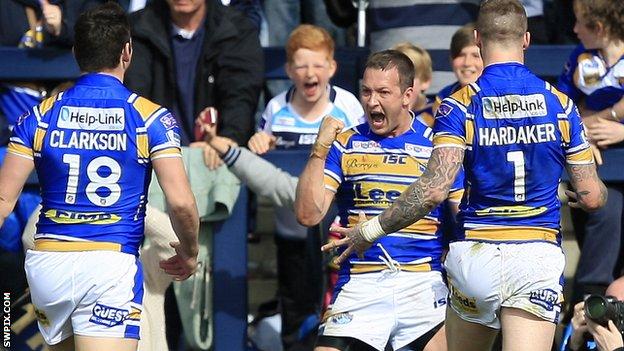 Super League leaders Leeds Rhinos will host Leigh Centurions in the quarter-finals of the Challenge Cup.

Leigh are top of the Championship with a 100% record from eight matches and beat fellow second-tier club Featherstone to reach the last eight.

Holders Wigan Warriors are at home to Castleford in one of two all-Super League ties, while bottom club Bradford Bulls play Warrington.

Keighley, the lowest-ranked side left in the competition, travel to Widnes.

The Cougars lie eighth in the Championship.

Leeds, who defeated St Helens 32-12 in the fifth round on Saturday, have not lifted the Challenge Cup since 1999. They have been beaten in six finals since then, most recently by Warrington in 2012.

All four quarter-final ties will be played during the weekend of 7-8 June.