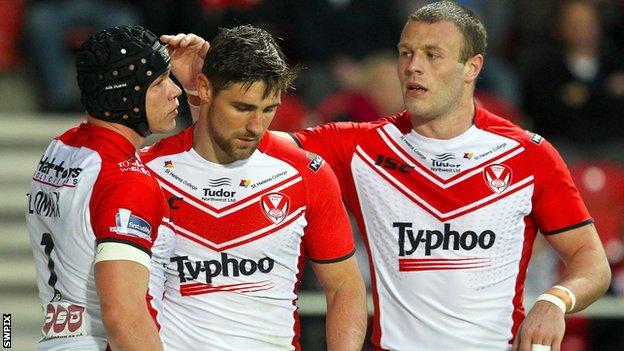 Broncos replied through Denny Solomona in their first meaningful attack.

Lance Hohaia and Adam Swift extended Saints' advantage and, even though Thomas Minns and Mike Bishay hit back, Jon Greenwood, Josh Jones and Mark Flanagan wrapped up the victory.

Nathan Brown's side's spell at the top may be short lived though, with rivals Leeds hosting Wigan on Friday and Castleford at Huddersfield on Sunday.

London, beaten in all 11 league outings this year and only off the bottom of the table because of Bradford's six-point deduction, may have sensed an opportunity to rattle their high-flying opponents, with St Helens coming into the game on a three-match losing run following last week's Challenge Cup exit to Leeds.

But any prospect of an upset was extinguished within the first 10 minutes, with Saints converting their dominant possession into two early tries.

Dawson was first over, picking up the loose ball when Ben Farrar and Iliess Macani got in each others way while trying to collect Jon Wilkin's dab through.

And Australian Walsh, who would go on to collect 16 points in a stylish performance, fooled the Broncos defence with a dummied kick before jinking in for a score and adding his second conversion.

London started to look firmer, particularly just short of their own try line, but continued to absorb pressure and fell further behind as Luke Thompson freed Lomax to cross.

Makinson added a fourth try, finishing a superb move that Walsh instigated with a tremendous dummy to Lomax, although Walsh was off target with both efforts off the tee.

It took almost half an hour for Broncos to earn a play-the-ball in the Saints half, but they took full advantage, working the ball out wide for Solomona to score, before Josh Drinkwater converted.

It was a brief moment of pleasure for New Zealander Solomona, who had to be replaced after clattering through an advertising hoarding and then into a metal railing in pursuit of a loose ball.

Saints could well have been accused of not capitalising on their first-half pressure, but they made amends immediately after the break, with Walsh selling a series of dummies and then sending Hohaia over, before Dawson freed Swift to cross.

Broncos remained spirited and scored when Minns collected a high kick from Drinkwater, who converted.

Hohaia then provided Greenwood for a try in the corner and Jones got in on the act after seeing his effort approved by the video replay.

Bishay did well to wriggle over for a converted Broncos score, but Flanagan touched down from a play-the-ball a few metres short of the line as Walsh kicked from the tee to make it three successes from his final four efforts.