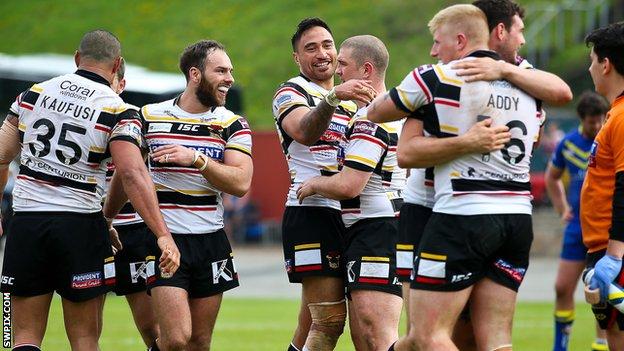 Bradford are back up to zero points after edging a frenetic Super League encounter with Warrington.

The Bulls, who were deducted six points at the start of the season for entering administration, also climb off the bottom of the table.

The Wolves' indifferent start goes on, with last season's Grand Finalists slipping to a sixth loss in 11 games.

But the day belonged to Bradford, who overcame the loss of full-back Brett Kearney to injury in the first half to register a third Super League win of the campaign.

Warrington prop Anthony England opened the scoring with his first Super League try for the Wolves, but the Bulls responded immediately when Foster, a late replacement for Luke George, touched down in the corner and then took the lead when Kearney ran in from 70 metres.

Bulls off the bottom

Bradford climb above London Broncos and up to 13th in Super League with their victory over Warrington on Sunday.

The Bulls were deducted six points at the beginning of the season after entering administration, and have won three of their 11 league fixtures this term.

Chris Bridge converted his own try to give Warrington, still missing a number of key players because of injuries, a two-point lead and that advantage was extended when Ryan Atkins and Joel Monaghan set up Kevin Penny.

It was the winger's first try in Super League since crossing for Wakefield in a victory at Catalan Dragons in February 2011.

Bradford remained in touch and reduced the deficit again when Tom Olbison collected Luke Gale's pass to cross, only for Monaghan to ease his way over from close range to give the visitors a six-point lead at half-time.

Purtell scored his second try after good work from Danny Addy to give the Bulls a crucial lead, which they increased when Foster kicked a late penalty.

And Francis Cummins' side held firm in the closing stages to clinch a win that took them above London Broncos on points difference and up to 13th in the standings.

"I've talked before about character, but usually in defeat and how we've worked hard within those games. Today it won us the game.

"It was tough last week, losing three props, and we are lucky that we've got Antonio Kaufusi in on loan from Huddersfield.

"It was a massive win for us - without a doubt the most satisfying win of the season. It's amazing what you can do when you all work for each other."

"They are playing with a lot of spirit and got some confidence last week.

"I know they were down on some troops and that's often when you pull together, and we needed to do that ourselves.

"Probably that desperation wasn't there for us in the way that we needed, whereas it was for Bradford.

"It's amazing what you can do when you all pull together and play with a bit of urgency and we need to find a bit of that ourselves in the coming weeks."