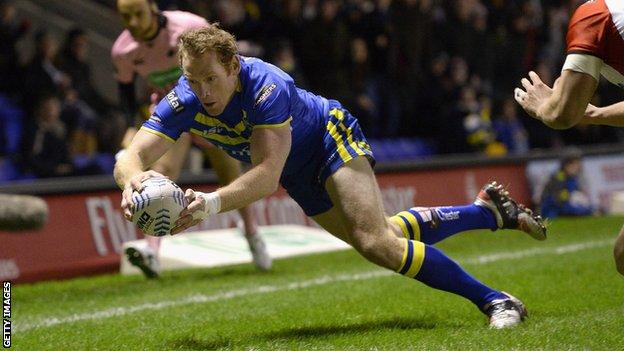 Joel Monaghan says Warrington's pride has been hurt by their indifferent start to the Super League season.

The Wolves, who have lost in each of the last two Grand Finals, lie eighth in the table with five wins and five defeats from their first 10 games.

Monaghan told BBC Radio Merseyside that performances must improve if they are to salvage something from the campaign.

"It's more of a pride thing for us. We don't like getting beaten," said the 32-year-old Australian winger.

"We can handle playing well and another team being better than us on the day, but some of the performances just haven't been good enough and that's what hurts more.

"But we're still in the hunt in the Challenge Cup and, over the next few weeks, we've got a chance to pull back some points and get up that table."

Monaghan, who has scored six tries in nine Super League appearances this term, refused to blame the injury problems that have robbed Warrington of several forwards, and added that the squad must take responsibility for the side's poor run of results.

He said: "For every game we've lost this year, the team Tony [Smith, Warrington coach] has put out has been good enough to do the job.

"It's more the way we've played rather than personnel. It obviously hurts having some injuries and missing some key players, but I think we're a good enough squad to adjust to that and we haven't this year."