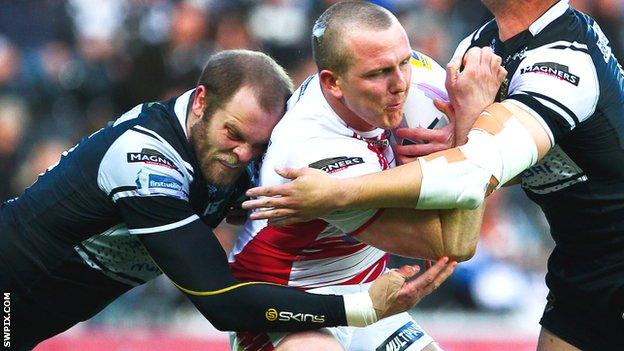 Wigan Warriors went third in the Super League table with an eight-try victory over Hull FC.

Wigan were dominant early on, and tries by Dan Sarginson and Anthony Gelling helped them open a 12-point lead.

That win is the best we've had this year, better than the St Helens one and you know what I think about them

Jamie Shaul and Fetuli Talanoa scored tries for the hosts after the break, but they were merely consolation.

Wigan were without seven regulars but they still managed to condemn Hull to their heaviest defeat of the season.

Sarginson claimed the first points of the game to put Wigan ahead as he burst over from short range, with Matty Smith kicking the conversion.

Gelling then powered over in the left-hand corner after great work from Tony Clubb, and Smith converted again to extend Wigan's lead to 12 points.

The hosts were then penalised for not releasing in time and Smith kicked the two points to strengthen Wigan's grip on the game.

Smith produced a quick break to free space for Hughes, who ran in under the posts for Wigan's third try, with Smith adding the extras.

The visitors' 14-point lead at the break was extended when quick passing from Michael McIlorum and Gelling set up Burgess, with Smith extending his tally to 10 points.

Sarginson sliced through the Hull defence and slid over to finish off a free-flowing move from left to right, but Smith missed his kick for the first time in the night.

A mistake in the Wigan defence saw full-back Shaul go over on the right-hand side to close the gap and give the hosts a ray of hope.

But Sarginson turned provider to set up Manfredi in the right corner to put the visitors 30-10 ahead, although Smith was off target again.

Gelling raced 20 metres to score his second try and Smith kicked the conversion, before Sarginson completed his treble after great work by Hughes and Burgess.

There was still time for a third Hull try and Miller converted Talanoa's score, but Wigan were already out of sight.

"Wigan pride themselves on being ruthless and obviously they've seen a wounded animal tonight and jumped on the back of it.

"We're in a rut. You can see they are all struggling. It doesn't get any worse than what I've witnessed in the last 160 minutes, so we can only go one way.

"We will come together Monday and focus on Hull KR and the Magic Weekend - and see where that goes."

"It was a win at all costs. I'm very proud of your young guns Dan Sarginson, Dom Manfredi and Joe Burgess, who all came of age.

"That win is the best we've had this year, better than the St Helens one and you know what I think about them.

"We played well. We were ruthless with some of our attack, we were back to our best."