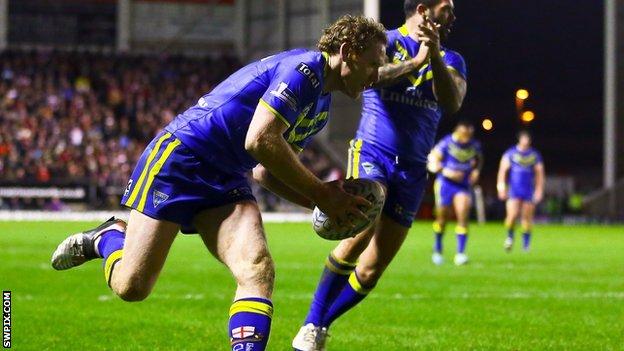 Joel Monaghan crossed twice as Warrington grabbed seven tries against a sorry Catalan side to move two points above them in the Super League table.

Both the winger's efforts came in a first half that effectively ended the contest as the hosts went 24-0 up.

Chris Bridge, Mickey Higham and James Laithwaite then took the total beyond 40 points shortly after the restart.

Monaghan claimed two tries on his 100th appearance for the Wire to take his tally to 101 since joining from NRL side Canberra Raiders in 2011.

Vincent Duport and Morgan Escare scored consolation tries for the Dragons who stay ninth, two places below the Wire.

But they never looked like being upset on their own patch as Monaghan squeezed over, before Anthony England seized on a bouncing ball to score and settle any early nerves.

Monaghan was then the beneficiary of some neat build-up between Matty Russell and Gene Ormsby to grab his ninth try of the season, before Stefan Ratchford flew over in his first appearance after calf trouble.

Catalan crumbled after the break as Bridge, who had a 100% success rate on the night, converted all three quick-fire scores as the game became a rout.

But luckily for the French side, the hosts relaxed and the Dragons were rewarded for long spells of possession by Duport and Escare crossing from close range.

"Joel has an incredible strike rate and has been terrific for us.

"We weren't sure he was going to make it tonight because he had some tightness in the warm-up, but he came through and did a good job for us.

"We have been working hard on some things and our defence was very good tonight. There was also a massive improvement in our kicking game.

"Chris Bridge and Stefan Ratchford were very good in the halves. Stef did a lot of good things after having a few weeks off and showed his abilities.

"Chris is going well in the half-back position and his kicking game was outstanding."

"I'm very disappointed. The lack of ball control and possession was poor and it's pretty hard on the back of that to perform.

"You can't keep defending and defending against a team like Warrington. It just became too hard for us.

"Against any opposition at this level, if you don't respect the ball, you can't challenge the opposition.

"We know we have quality players who can play and do something special with the ball, but that was not the case tonight.

"We need to keep working hard and learning, because we had a very tough lesson tonight."