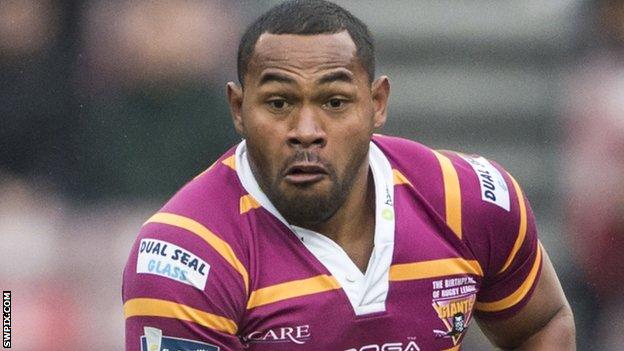 Huddersfield Giants recorded their fourth Super League win in a row but were made to battle for the points by a hard-working London Broncos side.

The hosts were 16-10 ahead at the break with tries from Atelea Vea, Alex Foster and Denny Solomona.

Ta'ai and Leroy Cudjoe tries and Danny Brough's kick won it for Huddersfield.

Conditions led to an error-strewn game but both sides showed glimpses of quality amid the knock-ons, and will have been pleased with the London effort, particularly in defensive areas.

However, Huddersfield were able to impose themselves and nilled the home team in the second-half to overcome their deficit.

Broncos are yet to celebrate Super League victory at the Hive.

Their last league win came on the final weekend of the 2013 season against Hull Kingston Rovers at the Twickenham Stoop.

Tongan back-rower Ta'ai knocked on close to the line and Eorl Crabtree was held up as Giants made a bright start, and eventually opened the scoring as Lunt forced his way over out of dummy-half on the left.

London went ahead after Vea went in on the back of heavy pressure and Josh Drinkwater converted, but were fortunate to see Jodie Broughton's foot in touch when he had been released.

Despite that setback, back-rower Ta'ai bullied his way over left of the posts to restore the Giants lead but the pendulum swung again when a knock on gave London a further set of six and Foster ran in with Drinkwater missing his conversion.

Mason Caton-Brown freed Solomona on the right, who had already missed out on a score with a spectacular effort, to give London a lead that Drinkwater extended with a penalty before the hooter.

Mullally crossed inside the first set of the second half for the Giants after neat work by hooker Lunt, and Ta'ai grabbed his second shortly after, hitting a flat Brough pass at speed to crash in.

Rain continued to tumble, leading to handling errors from both sides and Brough clipped a two-pointer over to build on Huddersfield's lead after Broncos conceded a penalty at the ruck deep inside their own half.

The last say of the game again went to the Giants, with Scotland international Brough the creator with a cute kick for Cudjoe's score that came with seconds remaining.

"I think we earned a little bit more respect today, but respect does not earn you two points.

"The players are in the dressing room disappointed to have lost the game. The start of the second half was the difference, as those two early tries, added to the conditions, was enough to get Huddersfield home.

"We are definitely making inroads though - today was a very good performance for 40 minutes and what we have to do is convert that into an 80-minute performance."

"If you look at the adversity we had to go through I'm pretty pleased. We had players out of position and others playing longer than they normally would.

"I really take my hat off to the boys. We had to reset, calm down and make some changes at half-time and I cannot fault the effort.

"London really provided us with a challenge today, and to keep them scoreless in the second half was a great effort."