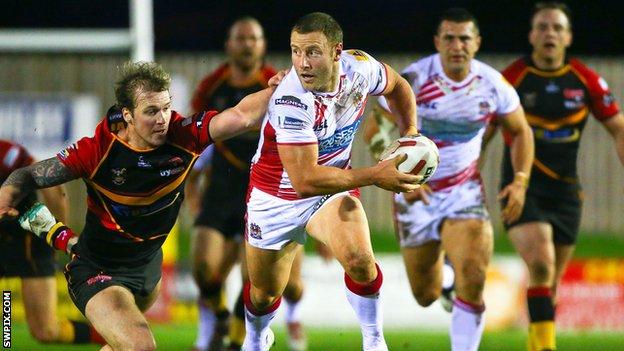 Wigan Warriors are in talks with half-back Blake Green over a new contract, coach Shaun Wane has confirmed.

The 27-year-old, who won the man-of-the-match award in last season's Grand Final win against Warrington Wolves, is nearing the end of his two-year deal.

And there have been reports that Salford are planning a move for Green.

Wane, who said he was unaware of any other interest in the Australian, continued: "There's a certain date when clubs are allowed to speak to players and we stick to that.

"After that he is fair game, but Blake has told me he's very happy here and we're way down the road and speaking to his agent."

Green joined Wigan from Hull KR at the start of the 2013 season and helped the club to a Super League and Challenge Cup double in his first year at the DW Stadium.

He was struck in the face in the early minutes of October's Grand Final, but recovered to inspire the Warriors to victory, scoring one of their five tries at Old Trafford.

This season, both he and half-back partner Matty Smith have stepped in as captain while regular skipper Sean O'Loughlin has been absent with injury.