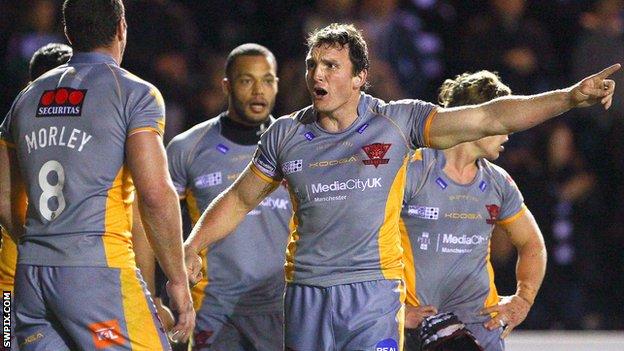 Much was expected of the side following the arrivals of several internationals at the end of last term.

But Salford lie 11th in the table and swapped coaches in April, with Iestyn Harris replacing Brian Noble.

"We are going to get better now and we're all buying into what Iestyn's brought in," said Gleeson.

Salford Red Devils were victorious at Bradford in their first game under new coach Iestyn Harris, but have not won any of their four matches since then.

When asked by BBC Radio Manchester if the club could finish in the top eight, the 33-year-old added: "I firmly believe that.

"We are going in the right direction and a few areas just need tightening up, which they will do as we move along."

The Red Devils won their first two Super League matches of the campaign, but have lost seven of their last nine in the league since then and were also knocked out of the Challenge Cup by Widnes.

Gleeson believes the Red Devils have not performed to their potential often enough this term.

"If we get a performance, the win will come," said the former Great Britain international, ahead of Saturday's home game against Hull KR.

"We're very inconsistent within a game. We're good for 10 minutes and then poor for the next 10. We need to concentrate on getting that 80-minute performance this weekend.

"Iestyn has really lifted the intensity of training and he's trying to implement some new systems. We're nearly there, but just a few individual defensive errors with the ball are costing us."