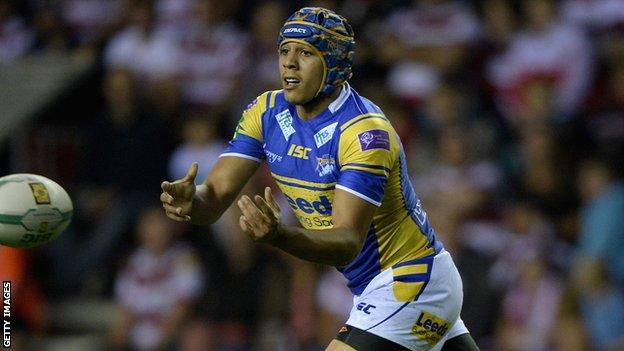 Leeds have confirmed that full-back or winger Ben Jones-Bishop will leave the club at the end of the season.

"It will be sad for me to leave. It was a big decision to reject the offer of a longer contract last year, but I wanted to keep my options open," he said.

"I will miss the Rhinos players and fans but they can be assured I want to finish my time here on a high and I will be trying my best to contribute to that success in any way I can."

Jones-Bishop, who was sidelined for six months last year because of a blood clot, lost his place to new recruit Tom Briscoe at the start of the season and has struggled to get a place in the Super League leaders' team, although he scored two tries in Thursday's 22-14 win over Castleford.

Head coach Brian McDermott added: "Ben has shown what a complete professional he is this season with his attitude and commitment to the team through what has obviously been a frustrating period for him personally.

"He remains one of the best young English players in our competition and he has shown, when called upon this season that he is a clinical finisher of chances.

"It will be sad to see him go at the end of the season but he will go with all our best wishes and I know he will have a big part still to play in this season for the Rhinos."