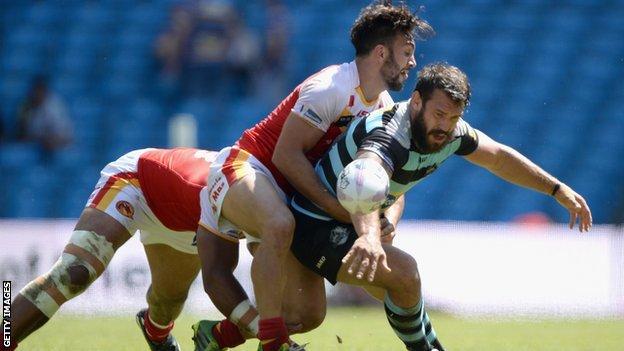 Catalan Dragons edged a close-fought encounter with London Broncos in the opening match of Magic Weekend.

London can count themselves unlucky to come away with nothing after scoring four tries, but Josh Drinkwater's missed conversion proved key.

Thomas Bosc's four successful kicks from four tries were crucial for the Dragons, who return to winning ways.

The French side came into the game having won their last two visits to the Etihad, but Laurent Frayssinous's side had to graft for the two points.

Joe Grima was taking charge of his second Broncos game and his team seemed to have benefitted defensively with a far tougher display at the back.

However penalties permeated their play and could have been costly but for some scrambling Broncos defence.

Broncos wait for a win

London Broncos have lost all 13 games so far this season.

Their last Super League win came on 8 September 2013, when they beat Hull KR in round 27 last term.

Dragons' Michael Oldfield spilled a Drinkwater bomb that went backwards to his relief, but London forced the drop out and eventually broke the deadlock.

Leon Pryce dummied his way through but bombed his pass to Morgan Escare on the inside but Catalans got a repeat set for the knock on.

The chance was wasted but eventually the Dragons did crack the defence, Bosc hoisted up a kick to the left and Vincent Duport leapt highest to bring it in and touch down.

Ben Pomeroy's bulldozing run down the right led to a second score just before the hooter, the centre's pass ricocheted off Denny Solomona and Elliott Whitehead reacted quickest to the loose ball to dot down over the line.

Thomas Minns failed to pass when he put through on the right with a three-on-one, and Catalans survived despite a reset tackle count just a metre out when London bowled the ball into touch.

Both sides were coughing up cheap ball, Zeb Taia guilty for the Perpignan club when he dropped the ball with one to beat from 20 metres out.

Drinkwater's grubber kick bounced tantalisingly in goal but James Cunningham was unable to pounce as Broncos sought parity, and the Dragons eased further ahead when Jeff Lima capitalised on field position to drill his way through the cover to score.

Catalan Dragons have now won their last three games at the Etihad against London Broncos.

London fought back, crossing to the left of the posts when Caton-Brown got his second on the back of good work from Scott Moore and Maxime Herold.

The Dragons restart sailed out on the full, the resulting penalty handed the Broncos field position and Greenwood further punished the error by crashing over on the left.

With 10 minutes remaining the Dragons seemed to have struck the decisive blow when Whitehead crossed on the back of Oldfield's storming right wing break but London had other ideas and Drinkwater went over following Nick Slyney's run.

However the half-back could not convert his own score and, despite a dramatic last five minutes, the Broncos could not force their way over.

"We were lucky. Lucky enough to win the game. I don't think we deserved more than them even though we created good opportunities.

"We came back to win, I cannot be happy but at least we move forward in the table.

"We were smashed by Warrington last week and today we didn't play great but we got the point.

"I am happy with the defence, we worked hard on that but the lack of control and patience was the big issue. I am sick and tired of talking about it with the boys."

"That's where we are the moment: we competed hard but just unable to get that two points we needed.

"I can't question the integrity and courageousness in defence, we're giving up so much weight advantage to the opposition and the conditions suited Catalan.

"In saying that, we were our own worst enemy. We had a chance to consolidate our field position in that last eight minutes and then they scored.

"The penalty count and the errors are a worry because we're a high penalised team and where we are in the table we're not doing ourselves any favours."