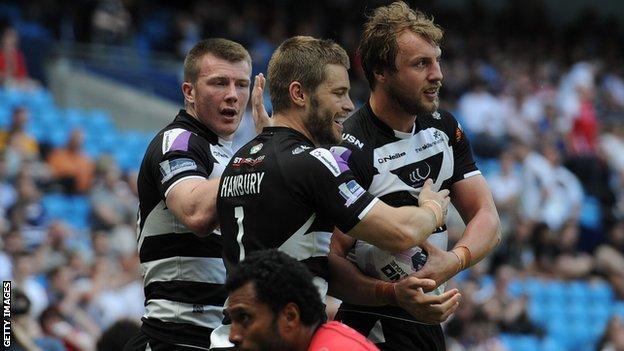 Junior Sa'u, Rangi Chase, Matty Ashurst, Danny Williams and Francis Meli went over for Salford, who led at numerous stages of the contest.

But Widnes held on to strengthen their spot in Super League's top eight.

Following immediately after Catalan's narrow success over London Broncos, this was another nervy affair that remained in the balance until Flynn's second try of the game with two minutes remaining.

Salford have now won just one of their first seven games under new coach Iestyn Harris, while Widnes recovered from their shock home defeat by struggling Wakefield in their previous outing to achieve a third win over the Red Devils in 2014.

Widnes had lost their first two fixtures at the Magic Weekend following their re-admission to Super League in 2012. They were hammered 68-4 by Warrington Wolves two years ago, a record margin of victory since the event's inception in 2007, and then beaten 28-22 by Salford last season.

Vikings half-back Danny Craven was stretchered from the field inside the first minute after colliding with Gareth Hock, although coach Denis Betts confirmed afterwards that Craven was not seriously injured.

And they overcame that early inconvenience to score with their first attack as Kevin Brown fired a pass out wide for Flynn to touch down.

Centre Sa'u powered over in reply, much to the delight of Salford owner Marwan Koukash watching on from the stands at a sunny Etihad Stadium.

England international Chase, another of Koukash's 14 winter recruits, ran in from 40 metres to stretch Salford's lead to eight points.

Widnes responded with two more tries of their own, Owens and Dean both crossing from close range, but Danny Tickle's failure to convert any of their three first-half tries ensured the sides went in level at the interval.

Ashurst's try gave Salford the perfect start to the second period, and although they momentarily fell behind when Hanbury's kick through ricocheted perfectly into the arms of White, the Red Devils took the lead again when Williams stole possession before racing clear to score.

A see-saw encounter swung in the Vikings' favour again as Lama Tasi and Macgraff Leuluai clashed near the Widnes line and Australian full-back Hanbury collected the loose ball before running the length of the field to dive over in the corner.

Tickle's successful penalty gave Widnes a valuable six-point cushion, only to concede again when veteran winger Meli brushed off two challenges to bring the Red Devils back within two points.

Flynn's second looked to have secured the game, although they had to survive a nervy set of six tackles near their own line in the final minute before being able to celebrate victory.

"There's no question about the character of this team, but to see it coming out in that situation was fantastic.

"We lost Danny Craven in the first 30 seconds and then we lost Jon Clarke 15 minutes into the game. We lost all our attacking shape virtually. We were all over the shop attacking-wise.

"What you saw today was a really good team effort. I'm really proud of them."

"There's a lot of talent in the team and we've got a tendency to want to score with every play.

"You can't win things without learning how to stay in a game. We did it at times and looked really strong, and when we went away from it, we looked really weak.

"The game was there for us to dominate completely, if I'm being honest. I want us to be a team that will dominate those games. Just at the moment, things are going against us and heads are going down, but they're a resilient bunch.

"They're hurting as much as I am and as much as the Salford fans are. We want to make sure we turn this around and we're working desperately hard to do that."