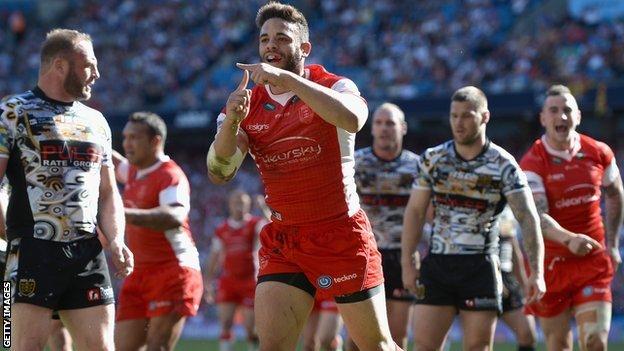 FC's Jason Crookes was dismissed for a high tackle after the break as Rovers built on their 18-12 half-time lead.

Not even Hull City's presence in a first Wembley FA Cup final could dissuade fans from travelling across the M62 and the Etihad was teeming with colours of both of the city's clubs.

The temperature had cooled by kick-off, but the atmosphere continued to simmer with call-and-response chanting between the two factions.

Roars greeted the first hit-up, and after a controlled start eventually the first scuffle erupted on the back of a Rovers try.

Liam Salter finished off a flowing move but Kirk Yeaman looked to have taken KR half-back Travis Burns over the horizontal in the tackle.

The chanting eased off but the ferocity in play was evident as Rovers prop Michael Weyman gasped for air as he came off with around 20 minutes on the clock.

After Rovers forced a drop out, Larroyer slinked over from close range and Travis Burns and Kris Keating then combined to feed Salter for an easy walk-in for try number three.

Hull forced their way over when Hadley thundered onto a Joe Westerman flat pass, though it came at a cost as the back-rower tumbled over a trip from Ben Cockayne and limped off.

Jason Crookes is the fifth player to be sent off in a Magic Weekend fixture. Wayne Godwin was the first to be dismissed at the event, for Salford against Crusaders in 2011, while Shaun Magennis, Chris Tuson and Gareth Hock were all shown red cards for their involvement in a mass brawl in the 2012 encounter between St Helens and Wigan.

After no-try verdicts from video referee Ian Smith for both sides, Yeaman set Shaul away on the hooter to narrow the deficit.

Crookes' high shot on Salter led to another fracas and the referee had no choice but to show the red card.

Rovers' double try scorer headed off for treatment and Gardner made the most of the advantage with a sixth career Magic Weekend try soon after.

Being a man down rallied the Black and Whites as Houghton scored from a trademark dummy-half sneak and Paleaaesina thundered over three tacklers to bring Hull within two.

However, Gardner struck again on the right to cap off a shuffling move and Hodgson's effort with two to go sealed bragging rights for the East of the city.

"We were out on our feet for the last try but the actual effort was fantastic.

"We played them at their place three weeks ago and their ruck speed was damaging to us and we allowed Josh Hodgson to jump out of dummy-half.

"For us it was about the performance today and making sure we did the little things well, and we did that for periods.

"We weren't at our best but it's two points and they're like gold in this competition.

"I was concerned when they scored some soft tries but I thought if we got decent ball there was a chance to score points.

"Liam Salter is in dizzy land at the moment but we don't play until Sunday so he's got time to recover, but he's a tough East Hull lad and he was standing at the end."