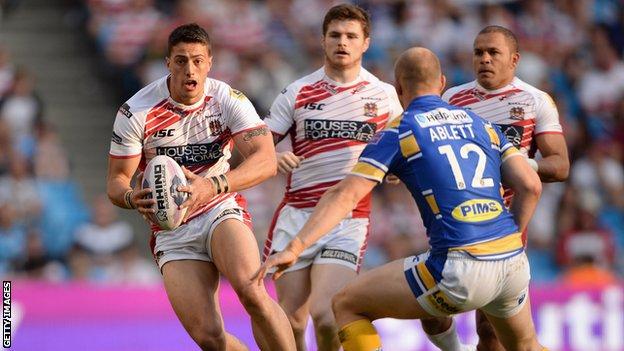 Tries from Anthony Gelling and Blake Green put the Warriors 12-4 up at half-time, Ryan Hall replying.

Michael McIlorum, one of three players shown yellow cards in the first half, also crossed to ensure Carl Ablett's score and Hall's second were not enough for the Rhinos.

Leeds stay top of the table by a point.

But Brian McDermott's men will be overtaken by St Helens on Sunday if Saints beat Warrington in the concluding game of the eighth Magic Weekend.

Day one at the Etihad Stadium, attended by a total of 36,339 spectators, was rounded off by a captivating contest between the two teams that, between them, have held the Super League crown since 2007.

Given the magnitude of the occasion and the intense rivalry between two of the biggest clubs in Super League, it was to be expected that tensions would simmer from the outset and they boiled over frequently, which only added to the satisfaction for Wigan's players and their vast army of supporters as they celebrated their success at full-time.

Both sides found attacking opportunities hard to come by early on as defences dominated the opening stages.

Reigning champions Wigan, missing a host of first-team regulars because of injury, registered the first points of the game after 15 gripping minutes, with Gelling claiming a high ball to touch down.

Matty Smith converted and landed a routine penalty to make it 8-0.

Then came the game's flashpoint, as a late hit by Wigan's Gil Dudson on Danny McGuire sparked a 26-man brawl, which was repeated after the very next play when McIlorum caught Leeds veteran Jamie Peacock with a high shot.

And the league leaders soon made their one-man advantage count as England winger Hall, back in the Leeds team after missing the victory over Castleford nine days earlier, eased over in the corner.

Shortly after the three sin-binned players returned to the action, Green, who later suffered a ruptured bicep, produced a darting run to the line that gave Wigan their second try and an eight-point lead at the interval.

After soaking up more Rhinos pressure after the restart, Warriors hooker McIlorum marked his 150th Super League appearance with a try under the posts.

Ablett's jinking run and Hall's superb finish after an outstanding offload from Joel Moon brought Leeds back to within four points with 15 minutes remaining.

The Warriors managed to hold on, although there was an anxious wait while Moon's late effort was ruled out for a knock-on by the video referee, a decision greeted with one of the loudest cheers of the day by the Wigan fans.

"There were four players out there who should never have played.

"They've not trained all week and played with injections, but we had nobody else. They put their bodies on the line against a big, athletic and skilful Leeds team.

"I think it was the right result. I'd have been absolutely distraught for the players [if Wigan had lost] because of the effort they put in."

"I thought Wigan deserved that. They were better.

"Wigan were more intense than us in the early stages. They put us off our game. We weren't allowed to attack as we wanted to do.

"Credit to Wigan and Shaun Wane. He had a supposed 'lesser' team out there and got them to play a certain way that disrupted us.

"I'm not too down about it. I hate losing, but we've been winning with a bit of class recently, and we've got to lose with class as well.

"When you're beaten by a team that's a bit better on the day, you've got to concede that, work out where and then fix it."