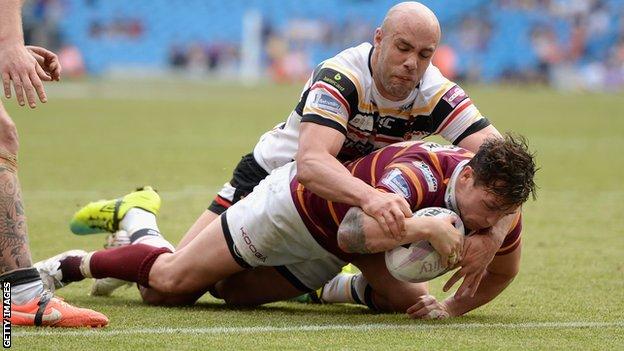 Bulls led 10-6 midway through the first half, but conceded eight tries before Jamie Foster's late consolation.

Half-back Danny Brough was among the nine different try scorers and he successfully kicked all conversions to ease Giants to victory.

Both sides also had tries ruled out, but Huddersfield were dominant winners.

Giants have recovered from a shaky start to put on the kind of form that saw them win the league leaders' shield in 2013, but the Bulls have struggled since overhauling their six-point deficit for entering administration.

Danny Addy went over in the corner to give Bradford a shock lead but the finish was contentious even after the video referee had awarded the score.

Both sides felt the heat, with forwards taking their time to get back into the line, and just as Bulls were finding their stride, Giants struck back against the grain when Brett Ferres's short ball found Joe Wardle on the run to the line.

Giants boss Paul Anderson remained nonplussed despite the score and his mood did not improve when a fluid, sliding move after repeat sets was finished off in the corner by Bulls' Foster.

But the game turned on its head after a Brough 40/20 kick gave the Giants field position and Shaun Lunt burrowed his way in from dummy-half to bring the scores level.

Luke Robinson crept in for a try and Jodie Broughton sprinted 60 metres to touch down as Huddersfield ended the half 24-10 ahead, in front of an applauding chairman Ken Davy.

As the clouds came in, Bradford's day in the sunshine turned sour with a second half blast engineered by Giants halves Robinson and Brough.

Brough went over on the back of Larne Patrick's break and Scott Grix slipped in to edge the Claret and Gold ahead.

Such a one sided game stifled the atmosphere and the Bulls players showed signs of fatigue as the Giants forwards Ukuma Ta'ai, Anthony Mullally and Patrick all crossed.

Foster's late score was mere consolation as the clock ticked down.

"The scoreline and the result is pleasing, I thought some areas we weren't great but we got the two points.

"It's disappointing they scored at the end if I am honest, and we know we have got points in us but we have got to make sure our concentration is great all the time.

"If it's not and you come up against the teams we're going to be playing in the next few weeks and concede three then you're not going to win the game.

"We've scored some good tries today. No coach will ever be happy with every aspect of the game but I am happy with the fact we won."

"Our effort was tremendously difficult because we only had two props and centres playing back row and back-rowers playing up the middle.

"We worked really hard and two really soft tries blew the score out. We got hit in the second half and we couldn't cope.

"It can build up on you, we're a team that passes the ball but we've got to go forward first.

"When the weather is hot it's about field position and that's what happened. We were really good for half hour but Danny Brough came up with a 40-20 kick that got them out of jail and they built on that."