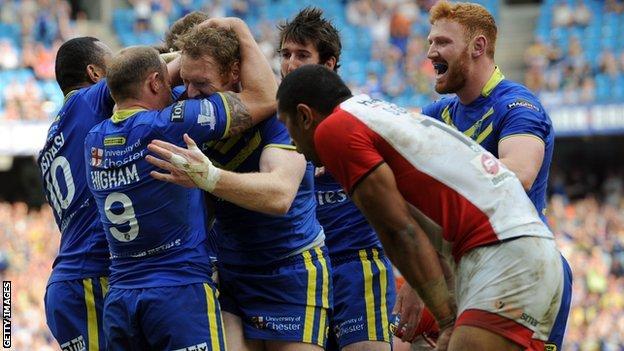 St Helens missed the chance to return to the top of Super League as Warrington clinched victory on the last game of Magic Weekend.

Gene Ormsby opened the scoring for the Wolves, with Rhys Evans also sneaking over in the corner.

The top of Super League

The match brought to a climax the eighth Magic Weekend, which saw four closely-fought games taking place on Saturday, followed by three one-sided ties on Sunday.

A record total of 64,552 spectators attended the event at the Etihad Stadium, which was hailed by Super League chairman Brian Barwick as a "truly memorable" weekend.

Having expected the final match to be a tense battle, it turned out to be anything but, as seventh-placed Warrington blew away high-flying St Helens with a masterclass in finishing.

Last season's losing Grand Finalists have now beaten their bitter rivals in four out of the last five games and, after a lacklustre display, Nathan Brown's men remain in second place, failing to capitalise on Leeds' loss to Wigan on Saturday.

Warrington forced a goal-line drop-out within the first minute, but were snuffed out by strong defending from the opposition.

The Wolves made their early pressure pay as winger Ormsby dived over in the corner for the first try.

From the resulting kick-off, Jonny Lomax pumped the ball out on the full and Warrington - boosted by their boisterous following - took full advantage, moving the ball quickly to Evans on the left side to touch down.

Saints, whose shell-shocked fans were sitting in silence at the opposite end of the stadium, were being pegged back onto their own try-line and were unable to launch any kind of meaningful attack in the opening 20 minutes.

And Warrington extended their points tally through prop Hill, who showed the speed and skill of a winger by dancing around the Saints defenders to touch down.

Warrington were in complete control and Evans notched his team's fourth try, but Ormsby was sent to the sin bin for holding down.

Saints found their first score when Walmsley touched down from Luke Walsh's pass to go in at the break 18-6 down.

Tony Smith's men emerged after the interval to score three tries in quick succession. Firstly, Atkins had an easy touch down from Evans' break, before Monaghan stretched over, and then Matthew Russell ran in to open up a 30 point advantage.

However, the match swung in Saints' favour when Jordan Turner bundled himself over, Lance Hohaia added another and Matt Dawson scored in the corner, but Stefan Ratchford's drop-goal and Monaghan's second eased the nerves and gave Warrington a comprehensive victory.

Warrington coach Tony Smith: "It was a good performance, we will have some good days and bad days but it wasn't a defining moment.

"We out-enthused our opponents and that is what they did to us last time. We had to step up.

"Stefan Ratchford was outstanding. He probably didn't have the start to the season he would have liked but that is the same with some of the players.

"You need to learn some stuff even with a big lead and we scored a try with a man down. We need to so some work on our right side and they exposed that."

St Helens coach Nathan Brown: "We are definitely disappointed - we had a chance to go top of the table but we were not good enough today.

"I told the players at half-time what we need to do to beat Wigan, Warrington or Leeds in a big game but I won't say what it is publicly.

"It wouldn't have mattered if we came back after half time and won the game. It would not have addressed the issue that we face as a club."