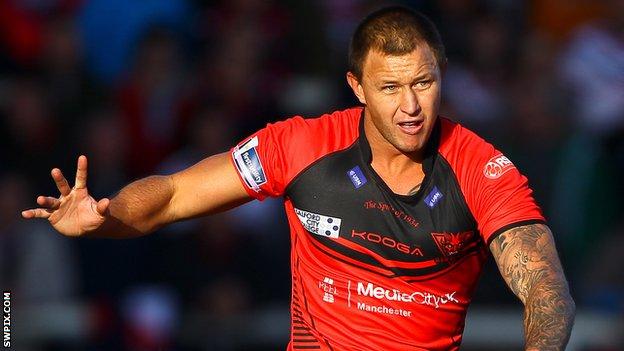 Salford will be without half-backs Tim Smith and Theo Fages for Saturday's Magic Weekend fixture against Widnes.

Fages will be out for around a month with a shoulder injury.

The Red Devils have declined to comment on the nature of Smith's absence, and head coach Iestyn Harris is unsure how long he will be unavailable for.

The event itself is irrelevant to us, it's about putting in that right performance, and let the fans enjoy it

The 29-year-old Australian, who joined from Wakefield at the start of the season, has only featured in two of Salford's last four games.

Salford have not won since Harris's first game in charge against Bradford on 11 April and the former Wales coach is keen to end that run at the Magic Weekend, which will be held at Manchester City's Etihad Stadium for the third successive year.

"The concept of it has grown over the past few years and it's turned into an event that everybody wants to be part of," Harris told BBC Radio Manchester.

"What we've got to make sure we do, as a group of players and staff, is get the performance right and get that win.

"The event itself is irrelevant to us, it's about putting in that right performance, and let the fans enjoy it."

Salford have already lost twice to Widnes this season, once in Super League and also in the fifth round of the Challenge Cup.