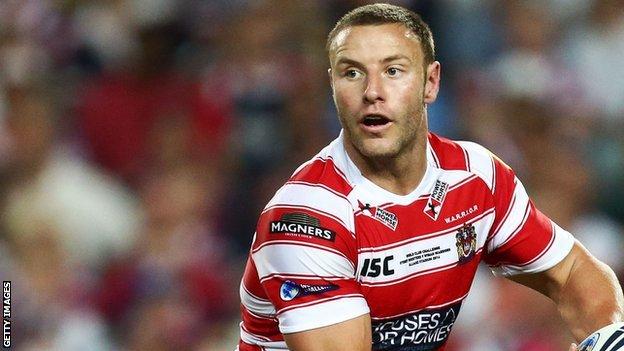 Wigan could be without half-back Blake Green for up to three months after scans confirmed he has torn a bicep.

The 27-year-old Australian was hurt during the Warriors' 18-14 win over Leeds Rhinos at the Magic Weekend in Manchester on Saturday.

Head coach Shaun Wane revealed Green, who scored one of his side's three tries before being forced off, may not return to action until August.

Wigan are already without a host of first-team players.

Captain Sean O'Loughlin and fellow England international Josh Charnley are among a sizeable group currently out of action.

Of their absentees, only USA international prop Eddy Pettybourne has a remote chance of being fit for Thursday's Super League fixture with Salford Red Devils.

Blake Green scored a try and won the man of the match award in last year's Grand Final victory over Warrington at Old Trafford.

Despite their long injury list, Wigan managed to overcome Leeds - who began the Magic Weekend top of the table - in an enthralling encounter at the Etihad Stadium.

Speaking immediately after the game, Wane described it as his "best win ever", given the strength of the opposition and his side's injury woes.

"There were four players out there who should never have played," he said. "They played with injections. We had nobody else, so they had to play, and that was against my gut feeling.

"They put their bodies on the line and defended tough against a big, athletic and skilful Leeds team."

Wane continued: "This is the worst injury crisis I've had. When I thought it couldn't get any worse, Scott Taylor and George Williams walked in from training.

"I didn't know what to do. It was the first time ever that I was stuck for words, but they put their hand up and they wanted to play.

"Not only did they play, but I thought our middles really dominated them. They ran hard and dug their shoulder in.

"Our medical department have been working overnight to get the players on the field. Everybody deserves credit."