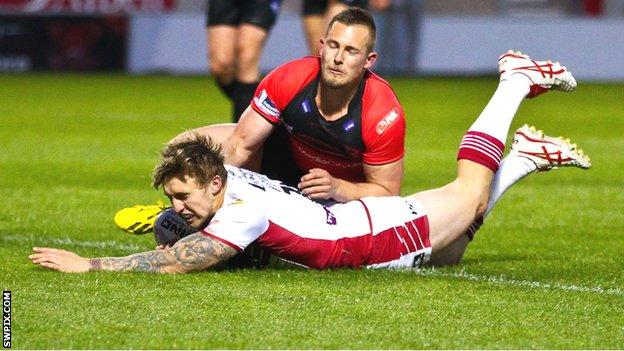 Wigan Warriors ran in four tries at Salford Red Devils to move up to second in the Super League table.

Both sides had two tries disallowed, before John Bateman's turn of pace saw him go over to help the visitors to a 6-0 half-time lead.

We could have been a little bit more clinical at times, but I thought it was a big improvement from us defensively

Sam Powell dummied his way through for Wigan's second try and Joe Burgess slid in to keep them in control.

Burgess ran in his second try from 70 metres, before Francis Meli's consolation try for the home side.

It was an impressive result for the visitors, who were missing nine regulars and lost hooker Michael McIlorum midway through the first half with a knee injury.

The game was a low-key affair and will be best remembered for referee Phil Bentham referring eight tries to video referee Ben Thaler.

Salford have now not won in seven matches and remain 11th in the table, while Wigan move a point behind leaders Leeds Rhinos.

That was unbelievably satisfying. It shows our strength in depth and all credit to our youth system

The hosts thought they had an early lead but their well-worked try, finished off by Meli, was ruled out for obstruction.

Wigan then had a Ryan Hampshire try also disallowed for obstruction, before Salford's Gareth Hock became the third player to see his score overturned.

Dan Sarginson waltzed through the Salford defence and was convinced he had the game's first points, but became the third player to be denied for obstruction.

Bateman finally broke the deadlock with a minute to go before the break, converting after good work from Smith, who added the extras to ensure his side led by six at the break.

Powell's clever dummy saw him run through to score and Smith's kick made it 10-0, and he also converted when Burgess went over in the corner, before Salford had another try disallowed.

Burgess put the gloss on the victory with a long run and Smith, who had minutes earlier kicked a drop goal, took his personal tally to nine points with the conversion.

Meli finally got the hosts on the board in the last 90 seconds by going over in the corner, but Tim Smith missed the conversation and Salford slipped to their ninth defeat of the season.

"I thought defensively we had a real dig. It was a real physical game.

"I didn't think there was a whole lot between the two teams. I just thought they had too much pace for us on the end if I'm honest.

"We could have been a little bit more clinical at times, but I thought it was a big improvement from us defensively because they are a very good side.

"We've made some big improvements. The biggest concern for me was the defensive system and I think we're looking a lot more solid."

"That was unbelievably satisfying. It shows our strength in depth and all credit to our youth system.

"Kids like Ryan Sutton, Rocky Hampshire and Joe Burgess are coming in and not only playing but playing really well.

"I am really pleased. It was a fantastic win. They are a good team who throw things at teams.