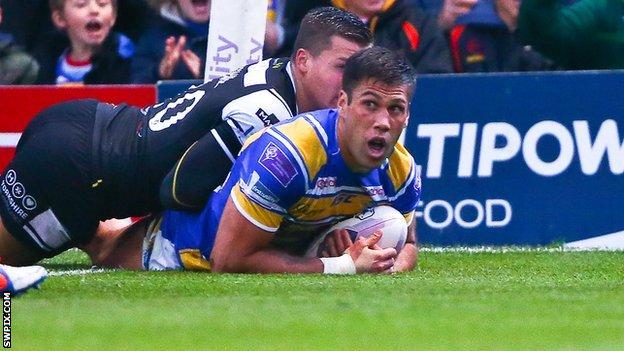 Leeds Rhinos kept their one point advantage at the top of Super League thanks to a hard-fought 20-6 win over Hull FC at a rainy Headingley.

Brad Singleton touched down shortly after the break and Sinfield added the extras, followed by a penalty.

An embarrassment of riches

Leeds' Ben Jones-Bishop has scored seven tries in six Super League appearances this term, but did not make Friday night's 17 because of the form of fellow wingers Ryan Hall and Tom Briscoe.

Teenage debutant Robbie Ward added some unfair gloss but Jamie Shaul then grabbed a consolation on the hooter.

Leeds stay at the summit despite immediately hitting back from - a loss that ended their seven-game winning run.

The Black and Whites on the other hand continued an alarming slump in form. Four successive defeats has seen them drop to 10th in the table and facing a struggle in the race for a top-eight finish.

Along with Leeds' inclusion of Ward, who left out and had Jamie Peacock missing because of injury, Hull FC had two players making their first appearances as Setimata Sa and academy graduate Callum Lancaster were given starts.

With a wet ball, the opening stages were predictably scrappy as the sides traded handling errors.

It took 25 minutes before the first points were scored, Hall running into a three-man tackle but somehow offloading a bouncing ball for Moon to touch down in the corner.

Either side of that, Hull captain Gareth Ellis was held up over the line and had an effort ruled out for a forward pass - decisions he had no complaints with.

After the break, there was little exciting action until Singleton benefitted from Danny McGuire's perfectly aimed grubber, which bounced off the posts and into his arms.

To the credit of Lee Radford's men, they did not lie down and responded with significant possession, though they failed to create an opening.

But the result was beyond doubt when Kirk Yeaman spilled the ball on his own line, leaving 18-year-old Ward to score the simplest of tries.

The visitors were rewarded for their doggedness with a little luck as Jordan Rankin's miskick landed over the Rhinos defence and in open space. Jordan Thompson gathered before feeding Fetuli Talanoa who juggled then played in Shaul.

Leeds Rhinos coach Brian McDermott: "The weather made it tough and the ground was a bit too firm, such is the odd nature of our pitch.

"We were good, we still had some tired men but given the context of the game we did very well.

"Last week was a contest down to the death, and my lads have had a tough run of fixtures."

Hull FC coach Lee Radford: "Effort was fantastic, especially in the first 60 minutes, but we needed to score some points.

"We put the ball dead at every opportunity to keep things tight, but we didn't seize on the chance when they had a tinkering spell with the interchange.

"We didn't push it with ball in hand so we didn't create enough chances."