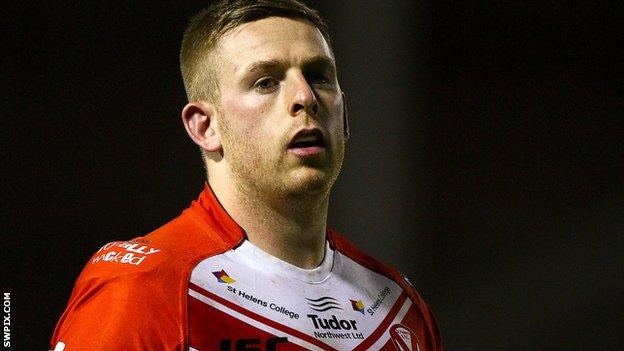 St Helens climbed back into second place in Super League as coach Nathan Brown enjoyed victory over his old club at Langtree Park.

The Giants never recovered from Saints' burst of four tries in the opening 25 minutes, Gary Wheeler setting them on the way with his first of a double.

Larne Patrick and Brett Ferres went over for the visitors' other two tries as they lost for the first time in six matches.

Luke Walsh kicked six goals for Saints, as well as a last-minute drop goal, as they got back on course after their Magic Weekend walloping by Warrington and ended Huddersfield's five-match Super League winning run.

Jonny Lomax was one of seven regulars missing from the St Helens line-up, but they shrugged that off as Sia Soliola sent Wheeler over before Wellens finished off a half-break from Walsh to touch down.

Walsh converted all three scores to make it 18-0 but Huddersfield gradually worked their way into the game and pulled a try back when Patrick took Brough's pass to charge over from 10 metres out.

But former Huddersfield winger Dawson replied for a 16-point interval lead which was quickly built on in the second half.

Wilkin raced onto Walsh's kick over the defence to touch down and after Blackmore briefly gave the visitors hope, prop Masoe took Roby's pass to score.

The game opened up in the final quarter, Ferres gathering Brough's kick to score before Wheeler hacked on a loose ball to grab his second try and Blackmore pounced on a handling error at the other end for the game's final try.

"The guys did really well. The response to last week's game and the manner of which we started was obviously quite pleasing from a defensive point of view.

"The effort and commitment for each other was great and the score probably flattered the opposition.

"I thought it was our best performance against good opposition for a while.

"I'm pleased how we got the physical part of the game right. It doesn't mean we're the finished article, we have got to keep working hard."

"We just didn't turn up. There was no intent in anything we did.

"When we got down there end we looked dangerous and scored 22 points in a pretty poor performance.

"Our start to the game has to be addressed. St Helens clearly responded to some harsh comments from last week."