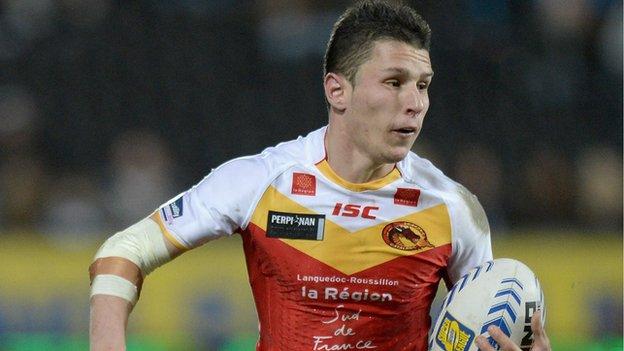 Catalan Dragons thrashed Bradford Bulls to move up to eighth in Super League.

Morgan Escare put the hosts ahead in the opening minute and they went in 18-0 up at half-time thanks to tries from Elliott Whitehead and Michael Oldfield.

And the rout continued after the break, with Escare, Michael Simon, Daryl Millard, Leon Pryce and Zed Taia all going over.

Jamie Foster's unconverted try was a mere consolation for the Bulls, who are in the relegation zone on zero points.

With only winless London Broncos below them in the table, Bulls' survival hopes are set to hinge on the success of the appeal against a six-point deduction.

Bradford Bulls' hearing for their appeal against their six-point deduction for entering administration will be heard on Wednesday, 4 June.

The panel could uphold the current decision, decide to deduct the club fewer points or rule that there should be no points deduction at all.

The Bulls have returned to zero points after three Super League wins but remain in the relegation zone.

And Francis Cummins's side have now suffered two heavy defeats in a row, following the 54-16 loss against Huddersfield on Magic Weekend.

There were early signs of how the game was going to go when full-back Escare raced 80 metres to open the scoring in the first minute, with Thomas Bosc adding the first of seven conversions.

Former Bull Whitehead picked up the loose ball and dotted down to score a second try for Dragons and they were soon 18 points ahead as, from the kick-off, Oldfield caught the ball and slipped past two players before going the length of the field to touch down.

With a comfortable lead at the break, Catalans were oozing confidence and Ben Pomeroy offloaded to Escare who grabbed his second of the game.

Simon was the next Dragons player to capitalise on the poor Bradford defence, crossing the whitewash after being played in by Bosc.

Bradford eventually registered points on the board when Foster latched on to a Lee Gaskell pass before going in.

But Catalan responded again when Jean-Philippe Baile's kick was snaffled by Daryl Millard and the winger scored in the corner, although Bosc could not convert.

Pryce then got in on the act against his former club before Taia completed the rout, collecting a chip from Bosc.

"We only conceded a try from a turnover so I've happy with our defence. And offensively, with the ball, we asked some really good questions.

"But we were smart too. We weren't throwing stupid passes. We laid the platform in the first half to win that game and we can build on that."

"It was a shocking start for us. You can't give Catalans all that time that we did.

"If we have a handful of players that are way off the pace which we had, then we get embarrassed and that's what happened.

"They haven't let me down, they've let everyone involved down, we were embarrassing.