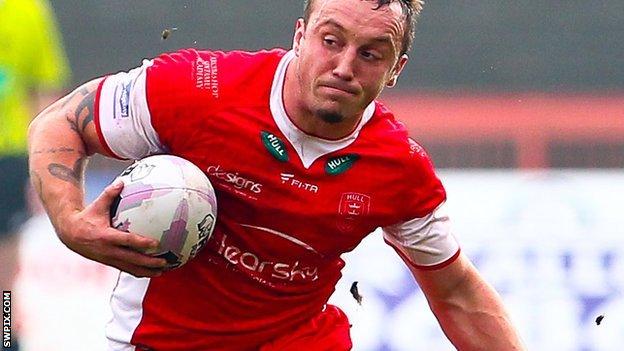 Neville Costigan set Hodgson up for his and the the game's first try before crashing over himself.

Adam Walker and Gardner also grabbed first-half scores, with Denny Solomona replying to make it 22-4 at the break.

While Alex Foster touched down twice for the Broncos, further Gardner and Hodgson tries, Hall's brace and Kevin Larroyer's effort competed the rout.

Defeat is the Broncos' 15th of the season in all competitions, and heaviest under new boss Joe Grima, who was in charge of his third match since replacing Tony Rea.

A burst down the right from Kris Keating on 17 minutes laid the platform for Hull KR to open the scoring, with Costigan finding Hodgson to touch town for the sixth time this term.

While Solomona prevented Gardner from grounding his side's second soon after, Costigan eventually extended the hosts' advantage by scoring under the posts.

While London hit back through Solomona after he collected a short pass from Scott Moore, Walker marked his return from an ankle injury with a piercing effort and Gardner also touched down before the break.

The Broncos were denied a second try before half-time with Mason Caton-Brown's effort disallowed for a forward pass.

And while Solomona wasted a promising opening with a knock-on after the break, Foster got on the end of a Josh Drinkwater kick to cross for London.

Good work from James Cunningham to cut through Hull KR's defence then gave Grima's men hope as he put Foster through for his second soon after.

However, some poor defending with a knock-on deep in their own half allowed Larroyer to score the Robins' fifth try, opening a 10-point lead once again.

Gardner then put the game out of the Broncos' reach with his second. Hall's brace and another from Hodgson late on condemned London to another heavy loss.

"I wasn't worried, I was disappointed that we conceded those couple of tries but with the quality of players in our side, I was expecting us to get away with it.

"We've got to give some credit to London, I thought they came back and played well. We turned over a bit of ball and gave away quite a few penalties and they got into the game.

"We switched off in the second-half, no doubt about it. To London's credit they came storming back in but I was really pleased with our response after that.

"We put our foot down and scored some nice tries. To score those points late in the game is very pleasing."

"I was really pleased with how we started that second half, it was really positive. But we probably beat ourselves a little bit.

"We got ourselves back in the game in the first 10 minutes of that second-half but just kept going back to silly mistakes.

"I thought the players responded to what we spoke about at half-time. It was more of a case of challenging them. I can't go out there and do it for them, it's got to come from within."