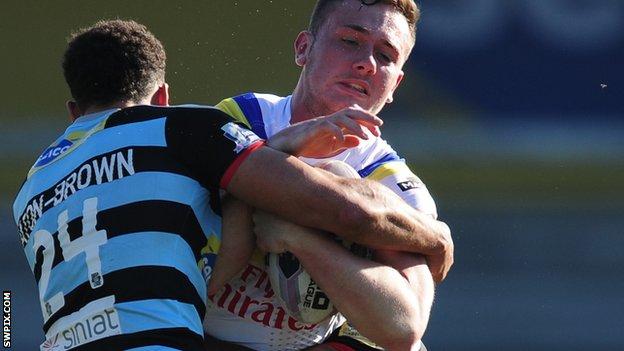 Stefan Ratchford put the visitors ahead with Currie grabbing a quick-fire brace and Gene Ormsby touching down to make it 18-0 at the break.

Chris Bridge converted his own try before Lucas Walshaw forced his way over for the hosts' only points.

Ryan Atkins and Richie Myler added further tries for the Wire with Bridge adding the extras to seal an easy win.

Victory is Warrington's fifth in a row at Belle Vue and ninth successive triumph over the third-from-bottom Wildcats.

Former Wakefield forward Ben Westwood was placed on report in the opening minutes for a dangerous throw which forced Scott Anderson to leave the field.

After defending two repeat sets after the penalty, Warrington took the lead through Ratchford after Atkins raced clear down the left touchline.

While Anderson returned to action midway through the first-half to help spark the Wildcats into life, they were punished for conceding back-to-back penalties.

The Wire moved the ball from left to right with Bridge setting Currie up for his first score in the corner.

The 19-year-old added his second a minute later, and Ormsby then linked up with Bridge to score the Wolves' third try in six minutes just before the break.

Bridge put the visitors 24-0 up before Walshaw finally produced a response on 54 minutes.

Scrum-half Myler marked his return from a shoulder injury by creating a try for Atkins with a smart offload before scoring one of his own, gathering a Currie kick to touch down near the posts.

"Currie was terrific today. He played three different positions - right centre, left second-row and loose forward - and I don't know which one he played the best in, he was very good in all of them.

"That's a great attribute for a young man to have. He had a very, very good day. He's exciting and I hope he continues to improve.

"I thought we started really well and had opportunities to build some pressure but the way we let the first try in was a bit of a disaster.

"For half an hour we competed really well and then the last six or seven minutes of the first half we came up with some really poor errors.

"We have always said this middle third of the season is vital for us. Two good performances over the next two weeks can put us in a position where there is a big chasm between us and the bottom two teams.

"If anybody said with 10 or 11 rounds to go that you are 12 points off the relegation places, we would have snapped their hands off."