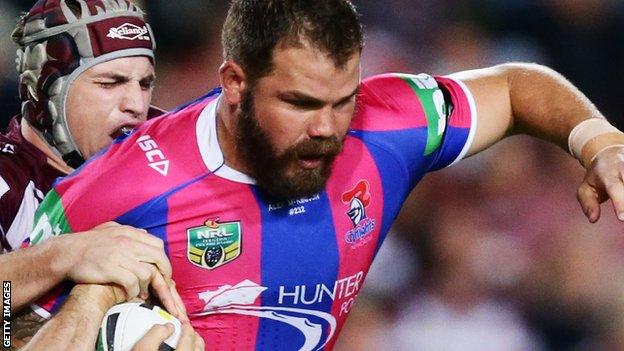 The 29-year-old, whose family originate from Warrington, joins the Super League leaders at the start of next season.

"I am excited about the challenge of joining a new competition, in Super League," he said.

This is a major coup...and reverses the trend in recent years

Cuthbertson played for Manly Sea Eagles against Rhinos in the 2009 World Club Challenge.

He also spent time at Cronulla Sharks and St George Dragons before moving to Newcastle, where he played 44 games.

"I have been to Leeds in the past and really enjoyed the city," Cuthbertson added. "My dad is from England, so my family are also excited about me coming over too."

Rhinos chief executive Gary Hetherington revealed the club first tried to sign Cuthbertson three years ago and said he is delighted to see a leading player move from Australia to England.

"This is a major coup for the Rhinos and Super League and reverses the trend in recent years," he said. "At 29, Adam is at the peak of his powers as a prop."

Rhinos head coach Brian McDermott said: "Given the state of the game in Australia and, in particular, the demand for front-rowers over there, this is a massive boost for the Rhinos and a big decision for Adam."